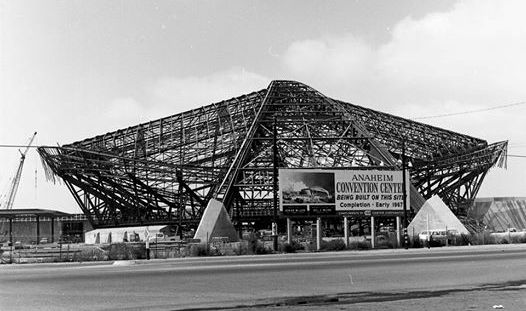 The OC Register editorial would have been more timely back in 1966.

Editorials like the one this morning opposing the Anaheim Convention Center expansion cause me to wonder if the editorial page staff at the OC Register has any understanding or institutional knowledge of Orange County government and politics.

But the taxpayer shouldn’t be on the hook if that 2 percent tax doesn’t meet its projections, especially with municipal governments creeping more and more into territories outside the fundamental scope of government and into places they simply don’t belong. The convention center industry is certainly one of those places.

A better solution: cities should stay out of the convention center business or any of the other landlording niches that local governments, in Anaheim and elsewhere, have carved out for themselves. In these cases, it is preferable to let the private sector take the lead.

Given the practical impossibility of time travel, common sense dictates focusing on present-day reality: the city is firmly ensconced in the convention center industry and has already invested hundreds of millions in multiple expansions and modernizations over the past half-century. The economic health of the Resort Area, as well as the fiscal health of the city government, are directly dependent on remaining a competitive convention destination that can not only lure newer, bigger conventions but prevent other destination cities from luring away the ones Anaheim already has. Hundreds of businesses and thousands of jobs depend on maintaining the Convention Center’s competitive edge.

That is a hard reality that cannot be overcome by idle parlor musings.

Convention centers are a risky venture to begin with, and expanding a convention center is an even riskier proposal. Many such venues across the country routinely lose money and are dependent on taxpayer subsidies.

Crossing the street and driving a car are also risky proposals; does the OC Register recommend we avoid those activities, as well? Anaheim isn’t a newbie in the convention business. The city has been succeeding in this sector for half-century in large part because the city’s leadership has demonstrated the vision and will to invest in remaining competitive.

Furthermore, the editorial’s narrow focus on whether or not a convention center runs a profit doesn’t take into account the larger ecology of the Resort Area. Expanding the Convention Center enables Anaheim to remain competitive and attract even larger and more lucrative shows, as well as accommodate more than one convention at a time. That, in turn, leads to more — and more affluent — conventioneers booking hotel rooms in Anaheim and spending money in the Resort Area. That, in turn, generate increased TOT and sales tax revenue for the city. In totality, investing in the expansion yields a positive return for the city.