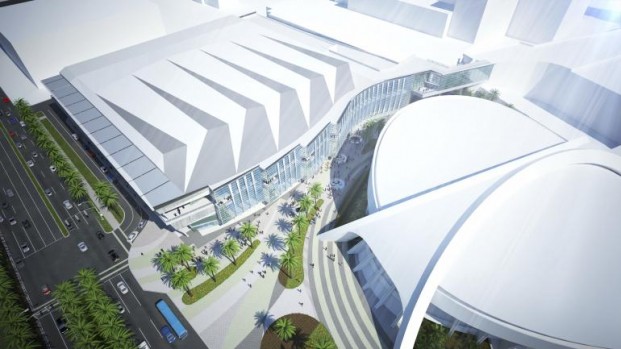 I don’t think any one doubted the outcome of last night’s meeting, but it was still heartening late last night when the Anaheim City Council voted 4-1 to approve the bonds to finance the expansion of the Anaheim Convention Center. Mayor Pro Tem Kris Murray and Councilmembers Gail Eastman, Lucille Kring and Jordan Brandman all voted yes, while Mayor Tom Tait voted no.

There was a huge turnout in support of approving the Convention Center bonds. Owners and operators of small and large businesses; union representatives; residents; single-moms; and hard-working folks in general asked the council, one after the other, to approve the bonds and get the Convention Center expansion moving forward.

The council majority spoke vigorously its support for the expansion and its opposition to the obstructionism of opponents. Kris Murray delivered impassioned oration drawing upon the examples of her predecessors and the plain requirements of the future.

“The fact is we have an opportunity in time. This is the seventh expansion. This isn’t 1960. This isn’t whether we get into the convention center business. that decision was made – thank God! Because our city is so far ahead of the curve financially from other cities – not just in the county, but around the state. In the Register today, two cities in orange County, Stanton and Placentia — Stanton tonight is considering a sales tax on their residence because they are cutting services because they can’t make ends meet; and so is Placentia. We have cities across the state filing for bankruptcy.  But Anaheim, courtesy of our Resort District, our stadium, the economic engines of this city – the Convention Center being a hallmark component of that – we aren’t in that position.  We are balancing our budget, reinvesting in police and fire, we are reinvesting in parks, and libraries, and roads, and potholes, and graffiti abatement. We are doing everything for neighborhoods because we have a thriving economy.

“So really what we are talking about is do we continue a vision that has existed in Anaheim for decades, of generating our revenue from private sources and from economic development that has been hugely successful – hugely successful. We are not taking a guess in the dark or a leap of faith here! We have decades of financial data backing up the decision before us tonight.

“Or do we go down the path of taxing and fee-ing our residents to pay for services, like other cities and the county and state, or God forbid, those that are filing for bankruptcy?

“I choose the former. I choose the history of Anaheim. I choose economic development and vitality, jobs, revenue for our city, for our neighborhoods. That’s how we get it done. I want to vote on this. We have been at this for months now. If this was something you wanted to take to a vote of the people, you had ample time in the last few months to ask that to come forward in an appropriate way. Tonight it way past the opportunity to make that happen in a timely fashion.

With that I would like to move to adopt the finance plan before us tonight and vote for the Anaheim Way.”

Councilwoman Gail Eastman took issue with the mayor’s characterization of expansion supporters as businesses looking to maximize their profit:

“I just have to say, Mr. Mayor, that i disagree with you about the representatives here all representing businesses. I heard, both at this public hearing, and the earlier public comment, many Anaheim residents who came here to express their support for this. These are not wealthy people. These are people who work hard for a living. They choose to live in Anaheim. They do their business in Anaheim. I heard one resident who came here to object.”

Eastman also swatted down calls by expansion opponents to place the whole thing on the November ballot, causing further delays and undermining the idea of representation government:

“The issue of putting this a vote of the people: the people elected us to do all these kinds of decisions. To sit here, to listen to everybody and to make these hard decisions.”

The expansion has been delayed for months by a destructive lawsuit filed in May by a tiny group of political activists organized as the non-profit CATER, and the Inland Oversight Committee (a front group for left-wing litigator Cory Briggs).

The Cory Briggs/CATER lawsuit has accomplished nothing except to increase the cost of the expansion, delay the start of construction and the accompanying jobs, and the jeopardize some the Convention Center’s most lucrative and prestigious convention clients. Both sent letters to the council late yesterday saying, in essence, that they will sue again unless the city council bows to their demands.

The council instead voted their minds and in the best interests of Anaheim. Kudos to them.