Open Letter to the OC GOP: It’s Time for Clarity on What’s Happening in Anaheim

Yesterday evening, I e-mailed this open letter to members of the Republican Party of Orange County Central Committee:

With the November election is only 10 weeks away, there is an urgent need for clarity among Orange County Republican activists, donors and officeholders about the true political situation in Anaheim.  For more than two years, it has been obscured by the dynamics of ongoing conflict between the majority of the Anaheim City Council and Mayor Tom Tait centered on a few, specific areas of disagreement.

The outcome of Anaheim’s mayoral and council contests are important — but of greater long term consequence for the political trajectory of Anaheim and Orange County is Measure L, which would replace Anaheim’s current at-large council elections with a by-district system that is used in cities like Los Angeles and San Bernardino.

Given liberal Democrats’ poor election track record under Anaheim ‘s traditional at-large election system, a coalition of left-wing interest groups and activists has been working since 2012 to enact a by-district election system. Under this scheme, Anaheim would be carved into 4 (or possibly 6) single-member council districts. Instead of being accountable to all Anaheim voters, council candidates would only be voted on by voters into their geographic districts.

Unions Used By-District Elections To Oust Conservatives In Capo Unified
Orange County Republicans ought to be familiar with this tactic. In 2010, the teachers union successfully sponsored an initiative to shift the Capistrano Unified School District from at-large to by-district elections, because it would make it easier for them to target and defeat the CUSD Board’s conservative majority. The union sold it as more democratic and being about “neighbors electing neighbors.” It passed, and as Central Committee members Tony and Jennifer Beall and Craig Alexander can attest, the unions were then able to take out the conservative majority in the next election.

Background: Liberal-Radical Coalition Pushing By-District Elections In Anaheim
The opening salvo in the liberal-radical fight for by-district elections in Anaheim came in June 2012 when Jose F. Moreno, a Chicano Studies professor with leftist politics, sued the City of Anaheim. His suit was represented by the ACLU and high-powered liberal attorneys from the Bay Area. Moreno alleged the at-large system violates a 2002 Democratic law called the “California Voting Rights Act” (which not a single GOP legislator supported). Moreno claimed Anaheim’s at-large elections discriminate against Latino voters and demanded the immediate imposition of a by-district election system without putting it before Anaheim voters. Moreno’s attorneys said putting by-district elections to a vote “is equivalent to an at-large election in its discriminatory effect on Latinos.” Guided by a belief that democratic representation is a function of race and ethnicity, they think a city council’s legitimacy rests on having the “right” racial/ethnic mix on the council dais.

In January 2014, Anaheim and ACLU settled the lawsuit. In the settlement, Anaheim admits no violation of CVRA and agrees to put a by-district elections initiative – Measure L — on the November ballot. The day after signing the settlement agreement stipulating no violations of the law by the city, Mayor Tom Tait joined the ACLU and Moreno at their press conference and congratulated them on their “victory.”

The lead signatory on the ballot argument in favor by-district elections is, unfortunately, Mayor Tom Tait – along with Jordan Brandman (the council’s lone Democrat). Tait’s strong vocal support has allowed the progressives who are fueling the campaign to claim their effort is bi-partisan. 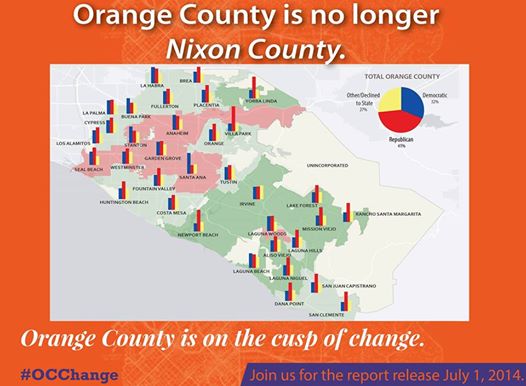 Not a single dime came from an Anaheim donor.  All the funding for Measure L is coming from unions and left-wing interests from the San Francisco Bay Area. That speaks volumes about who by-district elections in Anaheim will benefit.

If Measure L passes and Anaheim is carved into single-member council districts, the city council will have a Democratic majority within a couple of election cycles. The districts will be equal in terms of population, not how many voters each has. A disproportionate number of Republican voters will be concentrated in the Anaheim Hills council seat, and the remaining council seats will either lean Democratic or, at best, be toss-ups. As the current GOP incumbents term out, those seats will go Democratic. For example, if Measure L passes, the district that would be represented by Councilwoman Lucille Kring if districts were in place now, would always be up during a presidential election year, with its higher Democratic turnout.

An estimated 8,000 people work in Anaheim’s hotels, but most people are unaware that the only hotels in Anaheim with unionized workers are the Anaheim Hilton and the Disney properties. That is a huge pool of potential union members and union dues. Las Vegas hotel and casino workers are the backbone of Democratic power in Nevada. Gaining control of the Anaheim City Council would put the Democrats in position to spur the unionizing of thousands of hotel workers.

In 2013, the Anaheim Ducks fired Aramark and brought its food service operation in house. Aramark workers belong to UNITE-HERE Local 11 (a major backer of by-district council elections in Anaheim); workers in the Ducks new in-house food operation are not unionized. The Republican-controlled Anaheim City Council defeated a UNITE-HERE Local 11-backed motion by the lone council Democrat asking the Ducks to allow its in-house food service workers to be unionized via “card check.”  Is there any doubt what would have happened to the Ducks under a Democratic City Council?

By-District Elections Would Turn Anaheim Into an Incubator for Democratic Candidates for Legislature, Supervisor
It’s not hard to discern the political fallout from a permanent Democratic majority on the Anaheim City Council resulting from by-district elections. The council would incubate Democratic candidates for the Assembly and state Senate and Congress —  and the 4th Supervisor District. The 4th currently leans Democratic: 37.4% Democrat and 36.1% Republican. It will be open when Supervisor Shawn Nelson is termed out in 2018, and the registration is trending away from us. Upwardly ambitious Democratic Anaheim councilmembers, able to tap into Anaheim’s strong fundraising base, would make it increasingly difficult to keep the 4th Supervisor District in GOP hands.

This is part of a wider liberal push. This year, Democratic Assemblyman Roger Hernandez introduced legislation to force general law cities of more than 100,000 to shift to by-district elections. Democrat activist Kitty Jaramillo has filed a lawsuit demanding by-district elections in Fullerton, claiming its at-large system “impairs the ability of certain races to elect candidates of their choice or influence the outcome of elections conducted in the city of Fullerton.”   An OCCORD/OCCCO counterpart in Ventura County narrowly failed to qualify an initiative to force Santa Maria to go to by-district elections.

Passage of Measure L, the by-district council elections initiative, would undermine the Republican Party in Orange County. It would make electing Republicans to the Anaheim City Council harder, and electing Democrats easier. It would shift Anaheim’s political center-of-gravity to the Left, and in doing so move Orange County to the Left. It runs totally contrary to the mission and purpose of the Republican Party of Orange County.  Three of the four Republicans on the Anaheim City Council understand the negative consequences of Measure L and are strongly opposed to by-district elections.

Consider how much time and energy, and how many, many years, Republicans devoted to ousting the Democratic majority on the Irvine City Council — and that was in a city where the fundamentals are much friendly to our party.  Then imagine how incredibly difficult it would be, if Measure L passes, for Republicans to ever win what we now have in Anaheim: a council majority? Why would the OC GOP stand idly on the sidelines while the Left organizes and raises money to make a Democratic Anaheim City Council a permanent fact of life?

It’s in the OC GOP’s self-interest to wake up to what is really happening in Anaheim. The activists of the Left are all too happy to keep Republicans distracted with a single hotel development subsidy while they’re hard at work to change the election rules in order to tilt Anaheim City Hall in their direction. This is a winnable fight. Measure L is only on the ballot because a left-wing college professor and the ACLU sued the city. There was no grass-roots citizen pressure or demand for by-district elections. The ballot argument against Measure L is signed by a broad spectrum of community leaders and is much stronger than the pie-in-the-sky promises made by Tom Tait and Jordan Brandman in their ballot argument.

The Republican Party of Orange County can fight to elect Republicans and grow the party, or it can slumber into decline. If it is the former, then a good step in the right direction would be for the OC GOP to take an official stance of opposition to Measure L and materially aid the campaign to defeat it. Another good step would be accountability for Republicans who are collaborating with this union/left-wing political drive.

I realize these are strong words, but they are the facts on the ground. I welcome any questions, feedback or requests for additional information and background. Thank you for your consideration on this vitally important issue.