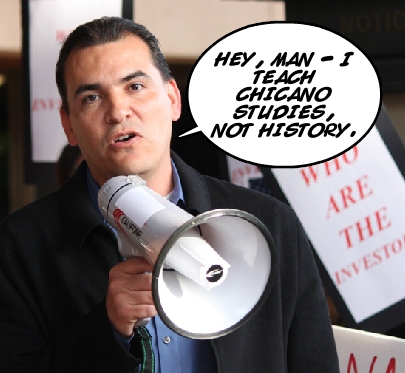 Dan Chmielewski of the LiberalOC.com has posted the first part of his interview with Anaheim city council candidate Joe F. Moreno. Here is an excerpt:

Q.  Why the sudden change to be a Democrat of which there is some criticism that you’ve become a Democrat to gain the benefits of party affiliation without the “sweat equity.”

A,  I became a Democrat because I felt the beliefs of the party aligned with the belief of my heart.  It coincided with the first time I went to the DPOC to address the party.  The timing was just right.  As far as “have I paid sweat equity to the party,” did I do it when I walked neighborhoods for Sharon Quirk Silva?  Did I earn it when I volunteered to register new Democrats at the DPOC booth at the Orange County Fair?  Or did it do it when I endorsed Democratic candidates, walked neighborhoods for them, endorsed them for office?  I believe I can contribute to the party and I believe I can help Anaheim build a strong bench of Democratic candidates for elections to come.

Q. You championed districts for Anaheim. What’s wrong with the district-based at large elections like they have in Santa Ana?

A. That’s a colonial based form of government that we fought a war against more than 200 years ago.  It’s not effective and it’s not what the people want.  Santa Ana should adopt what we are trying to do in Anaheim.  To use the Santa Ana method of district elections further disenfranchises Latino voters.  While we make up the majority of the city’s population, we are only 32 percent of the electorate so we cannot affect change or even influence elective races even if we want too.  That’s the basis on a California Voting Act for which we filed the lawsuit.  This is issue number one for me.

I didn’t realize the Founding Fathers fought the Revolution in order to end from-district council elections. Who knew?

You can read the rest of Dan’s post here.