Gunfight at the ARA Corral, Continued 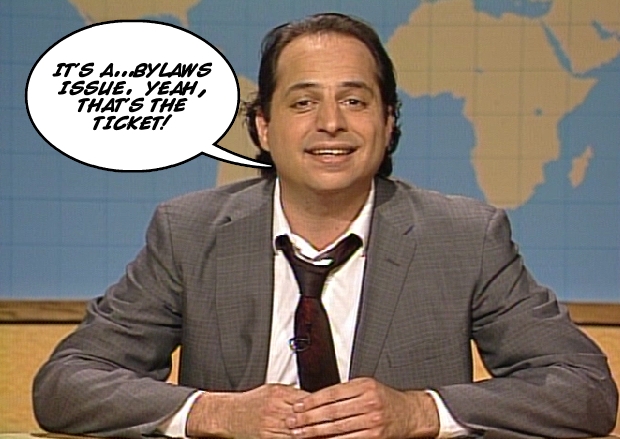 Anaheim Republican Assembly President Steve Sarkis forwarded me this e-mail he sent early this morning to Tom Hudson, the parliamentarian and chairman of the CRA Rules Committee.

Wait – let me put this in the breathless prose of modern journalism: Anaheim Blog has obtained an e-mail sent by Anaheim Republican Assembly President Steve Sarkis to Tom Hudson, who is parliamentarian and chairman of the CRA Rules Committee:

I called an August meeting of ARA (notice included Benita) and we had a quorum and we held elections.

Attached is a copy of the notice handed to me by John Briscoe after my August ARA meeting was adjourned.

There is no authority in the CRA bylaws to support the contents of this notice.

The May and June meetings were called in accordance with ARA bylaws. A quorum was not obtained and the meetings had to be adjourned. What happened at the July meeting (loss of quorum) is already known to you.

Roberts Rules of Order state that an elected officer retains that office until elections (in accordance with the bylaws) are held for that office. If elections cannot be held due to lack of a quorum, then the elected office is not automatically vacated.

ARA bylaws do not state that any elected office is automatically vacated if elections are not held in the month of May.

Benita is only an ex-officio member of the ARA Board and has no power to call an ARA meeting much less conduct elections for ARA officers unless there has not been at least one meeting called during any one quarter.

Charter Review has no authority to interpret a unit’s bylaws and make a decision that the offices of a unit have been vacated and then hold a reorganizing meeting and elect new officers. Only the Board of Directors has that authority.
Steve Sarkis
President
Anaheim Republican Assembly

Clearly, Steve has a different perspective on the issue (and it’s interesting that the letter that CRA President John Briscoe gave to Steve Sarkis yesterday is post-dated today, August 21).

Again, anyone who says this is about enforcing proper governance in the ARA is…I’ll be charitable and say “fooling themselves.” Does anyone think all those state CRA officers (representing the controlling faction of the last couple of years) flew down to Stanton so they could slap down Steve Sarkis? Does anyone think this would be happening absent the dynamics of the Anaheim mayoral contest? Does anyone think the flood of people with a sudden interest in joining the Anaheim Republican Assembly will be attending ARA meetings a couple of months hence?

There’s nothing new going on here. This is about gaining control of the ARA in order to get an endorsement for the Tait Slate, which would allow the CRA to be used as a vessel for targeting GOP voters with mail attacking Lucille Kring, Kris Murray and Gail Eastman. The Tait campaign thinks it sees an opening and is trying to exploit it. I get it. That’s politics. Let’s just recognize these machinations for what they are, and not pretend this is about “enforcing bylaws.”