ACLU Contributes $10,000 to Measure L – the Campaign for By-District Elections 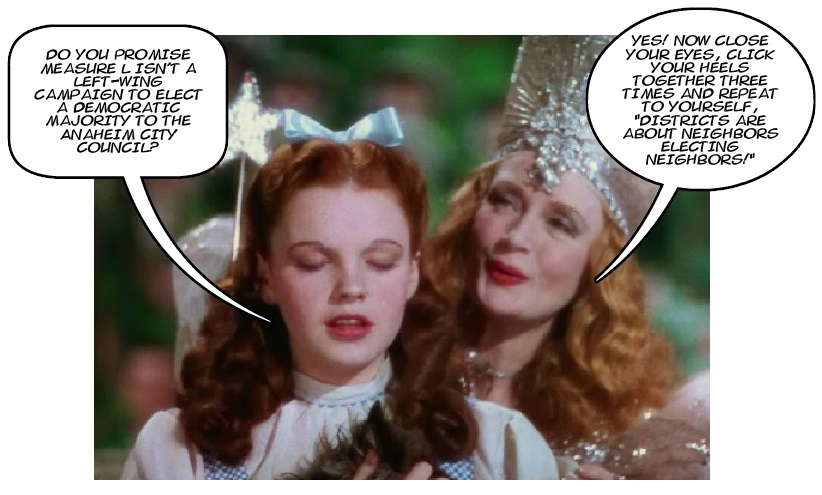 Here’s news for any conservatives and Republicans out there still clicking the heels of their ruby slippers together and telling themselves the campaign for by-district elections is NOT a left-wing political initiative to capture Anaheim city government: the ACLU of Southern California has donated $10,000 to the Committee for District Elections.

The Committee for District Elections is the “Yes on Measure L” campaign, Measure L being the ballot initiative to carve Anaheim into single-member council districts – which in turn is born of the Left’s frustration at being unable to elect Democrats to the Anaheim City Council under the at-large election system. Only one of three mayors and just three of 12 councilmembers elected in the last 20 years have been Democrats.

Measure L is about putting an end to Anaheim’s status as the largest city in California with a Republican majority city council.

The ACLU joins the Orange County Labor Federation (the AFL-CIO chapter in OC), the PowerPac.org Voter Fund (a San Francisco-based left-wing “issues” group that “invests” in building “progressive infrastructure”), and OCCORD (an arm of the militant UNITE-HERE union) as funders of the Yes and Measure L campaign.

To date, all of Measure L’s donations come from left-wing groups from outside Anaheim.

That’s the reality – as opposed to the fantasy that Measure L is about good government and “neighbors election people from their neighborhoods” – unless you think 85,000 people is a “neighborhood.”