Jose Moreno Stands By His Support of Tom Tait For Mayor

As readers know, Mayor Tom Tait is trying to defeat his two Republican council colleagues and has recruited two candidates for that purpose: a guy who lives down the street from him, Doug Pettibone, and Anaheim City School District Trustee James Vanderbilt.

Since there are only two council seats are on the ballot, that would seem to leave Tait’s political ally Jose F. Moreno out in the cold. Two weeks ago, dyed-in-the-wool lefty Moreno changed his registration from NPP to Democrat, and then filed to run for Anaheim City Council.

However, Moreno is standing by his endorsement of Tom Tait for Mayor. He told the LiberalOC.com:

I gave my endorsement to Mayor Tait back in January and I gave money to his campaign because he has been fighting for things that matter to me. Mayor Tait fought harder than anyone on the council for district elections. My endorsement of the mayor will stay with him as long as he wants it.

Say this for Moreno: he sticks by a promise. He still has a Tait yard sign in front of his house: 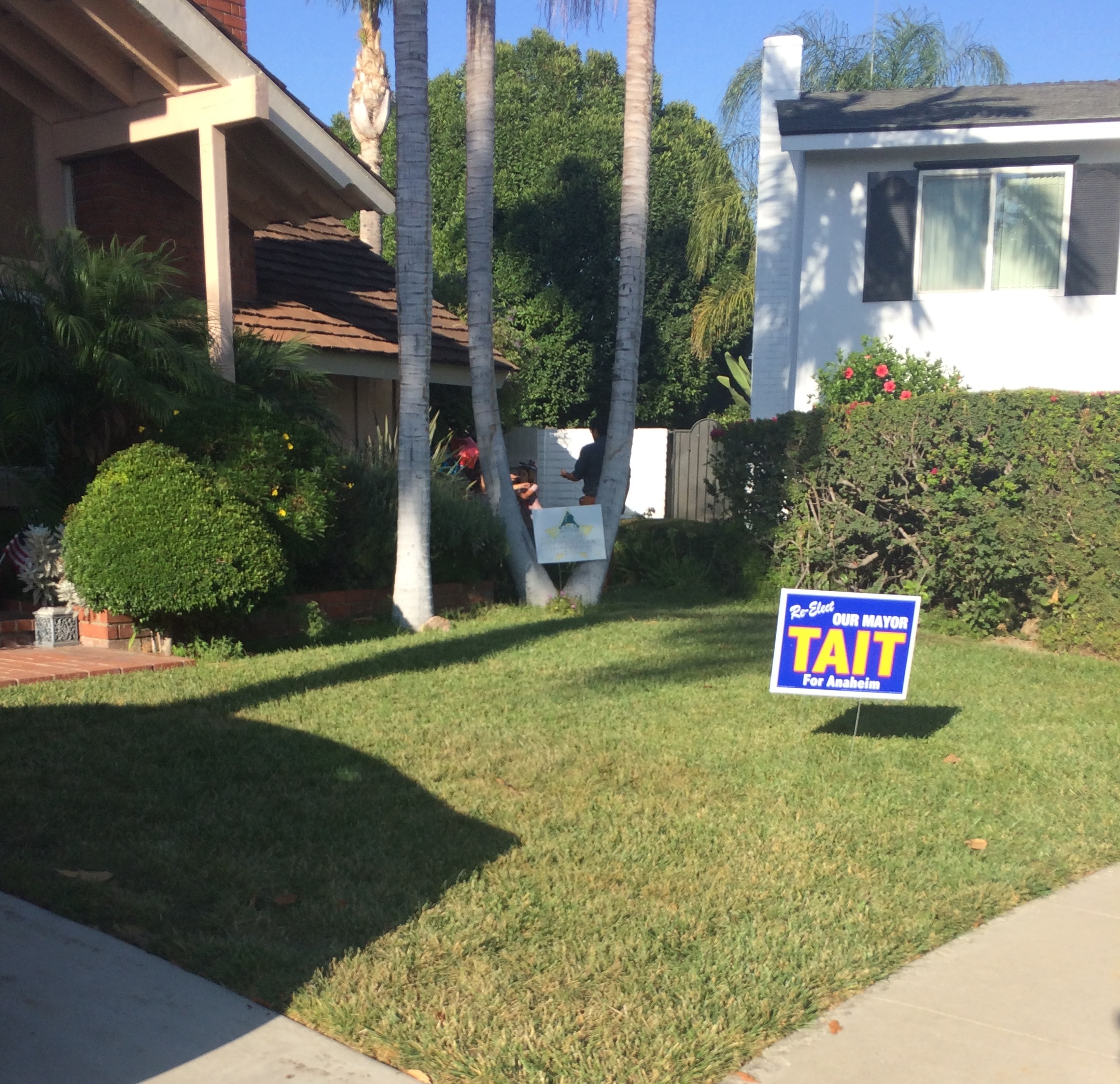 A few months before the November 2012, Tait told Steve Chavez Lodge that unless Lodge changed his position on GardenWalk from support to oppose, he would pull his endorsement of Lodge’s council campaign. After Lodge declined to flip-flop for Tait, the mayor promised he would interfere with Lodge’s campaign or endorse anyone else for council.  He broke both promises soon after when he made Lewis Consulting quit as Lodge’s and then campaigned hard for the OCEA’s council candidate, John Leos.

Some county Democrats have their own view of how genuine Moreno’s conversion to their party is. They note that Moreno stands by Tait even though there is a genuine progressive Democrat in good standing in the race, Lorri Galloway.  “This is very fishy,” as one Democrat observer put it, wondering if Tait, Vanderbilt, Pettibone, and Moreno are colluding to dilute the Republican vote for Eastman and Murray so that Moreno can get elected to the council and help Tait put more independent charter schools on city property, “such as the GOALs charter school recently approved by the Anaheim City School District, without any consultation with the City of Anaheim regarding use of a city-owned property.”

Moreno’s staunch support of Tait for Mayor has both Republicans and Democrats suspicious. No mean feat.