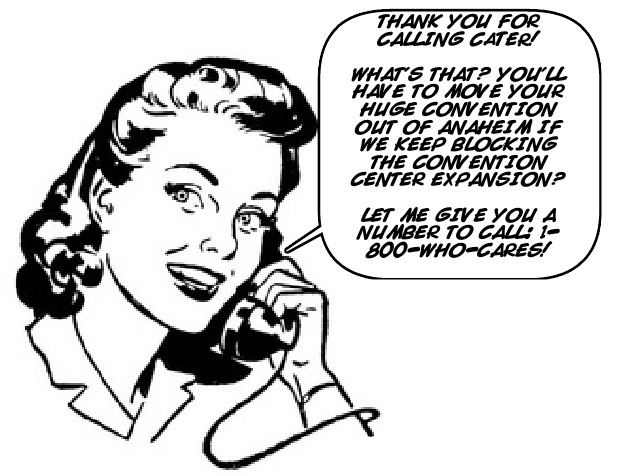 From the beginning, CATER gadflies have scoffed at the suggestion that their legal battle — waged in partnership with liberal San Diego litigator Cory Briggs and his Inland Oversight Committee cutout – to obstruct the Anaheim Convention Center expansion would have a negative economic impact on the city. [And if it did, their attitude has been “so what?”]

It’s ironic that a group styling itself as a Coalition of Anaheim Taxpayers for Economic Responsibility would be so economically irresponsible.

This August 22 story in the OC Register shows CATER’s deluded attitude is…deluded, and could have cost the Anaheim Convention Center at least two major conventions:

The expansion turmoil has prompted at least one trade-group executive to says his organization would look at options to leave if the expansion doesn’t materialize.

“We’d have to assess our options and current growth. We’ve been going with the knowledge and assumption that it’d be happening,” said Adam Andersen, group show director for New Hope Natural Media, which runs the Natural Products Expo West.

The top executive of the National Association of Music Merchants said he is cautiously optimistic the expansion will be completed a year before NAMM’s long-term contract expires in 2018.

“We are counting on the expansion to hold us. We probably could inhale or tighten our belt for a year or two, or even three, until the expansion is completed,” said Joe Lamond, NAMM’s president and chief executive officer. NAMM is the biggest trade group to visit Anaheim’s convention center.

In the past, Lamond has said an expansion is vital to the trade show staying in Anaheim. Organizers have said the show generates $91.5 million in spending at local restaurants, hotels, and tourist attractions like Disneyland and elsewhere.

CATER has filed one lawsuit to stop the financing of the expansion and likely will file another in response to a second vote in July, to sell $300 million worth of bonds to pay for the project, said Greg Diamond, a lawyer representing the group of local residents.

“This is not a done deal,” Diamond said.

Rather, Diamond will file another response as Cory Briggs’ does, so he’ll something to draft off.

So, Diamond, Cynthia Ward, Brian Chuchua (and the indeterminate number of claimed but unidentified CATER “members”) want the city council to punt its decision-making responsibility to a city-wide vote that is not required by law – no matter how much economic havoc that delay would wreak. hey will have their non-mandatory vote no matter how much damage they cause! There’s economic responsibility for you.