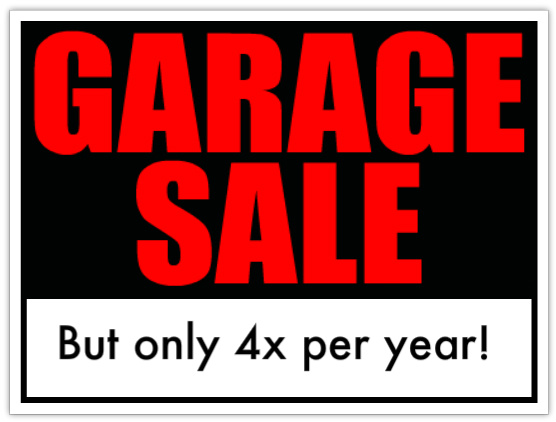 This weekend is one of only four during which Anaheim residents may legally hold garage sales under a 2012 ordinance unanimously adopted by the city council, and the Orange County Register today took the occasion to run a critical editorial:

…such a prohibition, especially on something like holding a garage sale at your own home, seems an inherit violation of a property owner’s rights.

The city does allow residents to apply for an exemption – if there is a death in the family or they are selling items before moving – but the city shouldn’t be the arbiter of garage sales, period.
After all, there are plenty of rules and regulations already on the books that could have dealt with the few offenders without condemning the group.

Trespassing, blocking public thoroughfares or operating what seems to be a business without a license are all enforceable offenses.

Instead, Anaheim and many other cities have chosen again to go outside their purview and pile on regulations.

And not about just the day a garage sale can be held, but the hours of operation, the serving of food or drinks and where a single sign, directing people to the sale, can be placed.

This continuing and growing interference into our daily, and largely trivial, affairs is a disturbing harbinger of the blurring relationship between the government and those it governs.

You can read the entire editorial here.

I agree and wrote as much back in November 2012:

However, it strikes me as pretty draconian to go from no limitations on garage sales to only four times per year. It seems to me the city could have explored and adopted a less heavy-handed approach, or a more liberal initial limit on the number of garage sales.

The ordinance contains provisions like a prohibition on offering food or beverages for sale or trade. Say your kids are entrepreneurial go-getters who want take advantage of the sidewalk foot traffic on a hot day to by selling bottles of water for 50 cents or a dollar; or your daughter the Girl Scout sees a chance to sell some Girl Scout cookies to help out her troop. No dice. They’d be breaking the law.

Older cities like Anaheim and Orange aren’t Irvine. They have a significant number of immigrant residents who are poorer, and who uses garage sales as a way of helping make ends meet. Amidst the seeming permanence of our slow economic growth and high unemployment, that’s not an inconsiderable consideration.

Unfortunately, these kinds of ordinances are unlikely to be liberalized, but there’s no reason not to bring back the old “freedom friendly” spirit and give the ordinance a second look. It would certainly be interesting to hear the thoughts of the various candidates for city council.