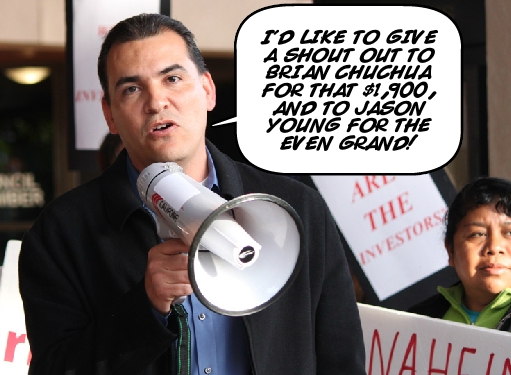 Moreno filed to run for Anaheim City Council on August 8. The next day, Chuchua wrote him a check for the maximum contribution of $1,900 and Young cut one for $1,000.

Chuchua is a retired businessman, two-time council candidate, one of the two (known) members of CATER (Coalition of Anaheim Taxpayers for Economic Responsibility) and helped found the Anaheim Small Business Association. Which begs the question of why he maxed out to the most left-wing, anti-business candidate in the race? Is imposing a gate tax, burdening Anaheim businesses with retention ordinances and killing jobs by imposing a “living wage” the economically responsible thing to do for Anaheim taxpayers? Of course not, but philosophically coherent action isn’t one should expect from the political precincts inhabited by Chuchua and those he follows.

The only other contributions so far to the Moreno campaign are a $1,000 transfer from his school board campaign account, a $1,777 personal loan, and a $1,900 contribution from United Food and Commercial Workers Local 324 PAC.  We won’t know about contributions of less than a $1,000 until the next round of campaign reports, due on October 6.

Let’s be generous and say Moreno’s campaign has received another $2,000 or so in donations of less than a thousand, which would give him $10,000. That’s nowhere near enough to run a competitive race, and his late entry doesn’t give him much time to raise a robust warchest. Most likely, his strategy will be to draft off the union and progressive PAC money being funneled into the Yes on Measure L campaign, which will likely feature him prominently in its voter communications. Yes on L walkers (and walkers for Jose Solorio and Sharon Quirk-Silva) will also drop his literature.

The dynamics of the council races are interesting. As the incumbents, Kris Murray and Gail Eastman have very big advantages in terms of name ID, ballot title and resources. The last time an incumbent councilmember lost in Anaheim was Richard Chavez in 2006 – and he was only narrowly beaten by Lucille Kring, a former councilmember who was a known quantity to voters. You’d have to go back many years before that to find another example.

Moreno does garner some benefit from having so many Republicans on the ballot and only one other Democrat, but even that would diminish if Team Tait implodes. And it’s highly unlikely Moreno will make it to November unscathed in the mail box. For example, I don’t think your ordinary Democratic voters will be enamored of voting for a candidate who sued the city he wants to run and in the process enriched his attorneys at the expense of Anaheim taxpayers.