There are less than nine weeks to go before the November election, and Anaheim is part of the battleground in two of the hottest legislative contests in the state: the 34th Senate District and the 65th Assembly District. In both cases, Republicans have fielded hard-working, hard-charging nominees — Supervisor Janet Nguyen and Young Kim, respectively – who are up against the usual tidal wave of Democrat special interest money.

The GOP political action group The New Majority is hosting a “Take Back California” fundraising event for Nguyen and Kim tomorrow evening at The Pacific Club in Newport Beach: 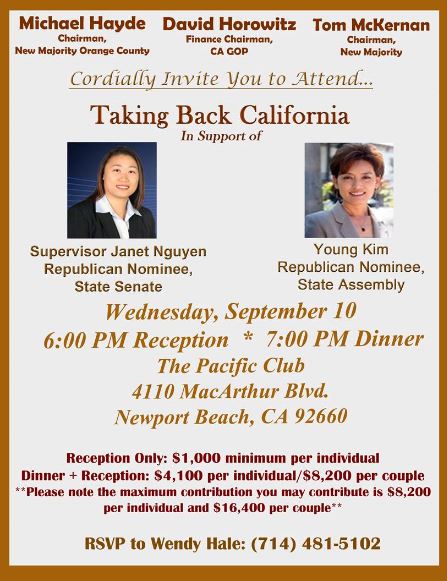 A victory by Janet Nguyen in SD34 would end the Democratic super-majority in the state Senate and place at least a modest check on their appetite for growing the scope, power and cost of state government. The Democrats understand the stakes, hence the heavy, union-funded campaign of anti-Janet radio ads running on conservative talk radio: they’re trying to dampen the enthusiasm of her GOP and conservative base going into vote-by-mail season.

Two years ago, Assemblywoman Sharon Quirk-Silva barely edged out a GOP incumbent with a number of vulnerabilities in a seat the Republican leadership took for granted after the June primary, with President Obama at the top of the ticket. It’s a very different ball game this year, and Republicans have a very hard-working, very different nominee.

Although Republicans will certainly be out-spent in both races, both Nguyen and Kim can prevail by raising sufficient funds to communicate their messages to voters, rebut Democratic attacks and inform voters about the positions of their opponents.