Moreno Receives Another $3,800 in Left-Wing Money 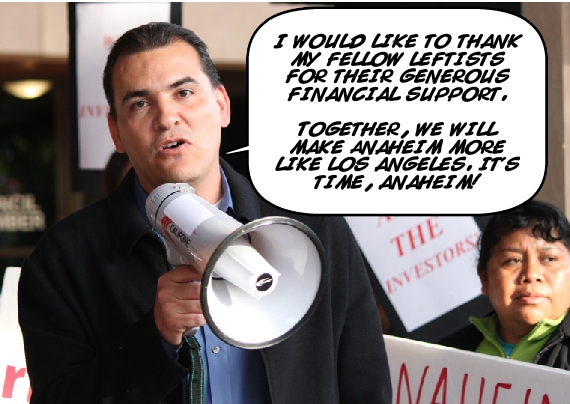 $1,900 From UNITE-HERE Local 11
On September 5, UNITE-HERE Local 11 – the militant union representing hotel and food service workers – gave him the maximum contribution of $1,900. This is no surprise, given the ties of ideology and association that bind Moreno and UNITE-HERE.

As readers know, UNITE-HERE would love nothing more than to have the thousands of non-unionized hotel workers in Anaheim on its membership rolls. It would represent an enormous infusion to dues revenue for the union. As I’ve noted before, unions are businesses. They are in the dues business. When UNITE-HERE fighting with Disney a few years ago, the sticking point was health care: Disney’s offer included a health care package for UNITE-HERE members. That may have been good for UNITE-HERE’s members, but not so good for UNITE-HERE, because those workers would no longer have been buying their health insurance from the union.

Currently, UNITE-HERE’s non-profit community organizing arm OCCORD (of which Moreno is a director) is litigating the city’s economic assistance agreement with the GardenWalk Hotels investors. OCCORD’s lawyer in the case is left-wing San Diego attorney Cory Briggs (who is also challenging the Anaheim Convention Center expansion in court in conjunction with CATER). OCCORD wants UNITE-HERE to represent the GardenWalk Hotels’ workers; if that happens, the lawsuit goes away. Welcome to unionized America.

Last year, UNITE-HERE lobbied the Anaheim City Council to force the Anaheim Arena Management (which runs the Honda Center) to let them unionize the new in-house food service operation – and do it via “card check”. Given that four of the five council members are Republicans, this plea to put City Hall muscle behind this attempt to unionize a city contractor’s workforce fell on deaf ears.

Which is why both Moreno and UNITE-HERE have been leading the charge for by-district council elections: at-large elections have proved a barrier to liberal, union-friendly council candidates, so they’re trying to change the rules in order to produce a different outcome. In this case, that outcome would be a city council with a Democrat majority. Does anyone (other than denizens of Team Tait HQ) doubt such a city council would have responded differently to UNITE-HERE’s request to lean on a city contractor?

$2,975 — or is it $1,900? – From Lefty Attorney Who Sued Anaheim
Jose Moreno’s claim to fame is being the lead plaintiff in a California Voting Rights Act (CVRA) lawsuit against the City of Anaheim, in which he demanded the imposition of by-district elections without a vote of the people. His lawsuit contended such an election would be discriminatory against Latinos.

[Here’s a suggestion for the OC Register or Voice of OC: ask Mr. Moreno about the cognitive discord between that conviction and his support for putting Measure L to a city-wide vote, i.e. how can a “legitimate” outcome be achieved via a system he condemns as disenfranchising Latinos?]

In any case, one of the lead attorneys representing Moreno was Robert Rubin – who also wrote the CVRA in 2002 and has made a fortune filing CVRA lawsuits against cities and school districts up and down the state. Rubin made out like a bandit representing Moreno, receiving a check for $264,585 (courtesy of Anaheim taxpayers) in the settlement that put Measure L on the ballot.

On September 7, Rubin kicked $2,975 back to Moreno’s council campaign…except that the contribution limit is $1,900. That fact apparently dawned on the Moreno campaign about 40 minutes after it originally reported Rubin’s donation, and an amended Form 497 showing a $1,900 contribution was sent it.

Rubin was also one of the  very first donors to the Yes on Measure L campaign. In other words, we are seeing the parallel, intertwined collaboration between Moreno and a coalition of outside left-wing interests whose goal is to decisively wrench Anaheim onto a leftward political course.

Rubin shares Moreno’s ethnically-colored world view, and is evident from his characterization of the CVRA issue in this 2010 SuperlLawyers.com profile article:

To Rubin, the issue comes back to fairness and fear. “You’ve got a white community in California that is still holding onto power—but they know it’s tenuous,” he says. “The quiet revolution that’s taking place in terms of Latinos assuming power in the school districts and city councils, where we have sued to get district elections, is, on a day-to-day basis, changing the face of California. And it’s scary to white folks. Because they figure, ‘Hell, if they treat us half as bad as we treated them, we’re in big trouble.’

The irony is lefties like Rubin spend waaaay more time thinking about race and racial differences than the white people they’re convinced are spooked by race.

This is the kind of racial-ethnic consciousness we can expect to have elucidated from the council dais in the event Jose Moreno is elected.