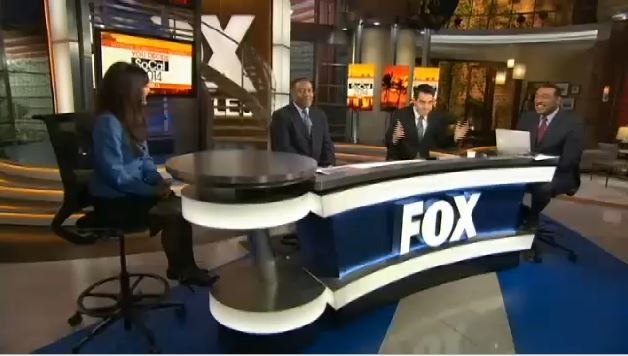 Lorri Galloway was interviewed on September 5 on Fox News LA by anchor Tony McEwing and OC Register editorialists Brian Calle and Joseph Perkins, as part of a series of “You Decide 2014” interviews with local candidates.

I found it well worth watching. Not so much because one learns anything new about Lorri Galloway, but because one gets a better sense of how the OC Register editorial page will approach the Anaheim’s municipal elections.

If body language is any indication, it seems OC Register is pre-disposed to endorse a “yes” vote on Measure L – even though shifting Anaheim city council elections from an at-large to by-district basis will lead to kind of municipal government policies the OC Register editorial page opines against.

At the 4:27 mark in the video, McEwing brings up by-district elections, and framing of the issue in a way that is informed by the liberal premises that authentic representation is a function of race and ethnicity, and at-large elections disenfranchise Latino voters. Calle nods vigorously throughout McEwing’s framing of the issue :

I hope the OC Register does not endorse Measure L. The editorial board’s traditional fealty to limited government is not served by a left-wing political initiative intended to breakdown limitations on the scope of Anaheim city government. The editorial page’s long-time support for color-blind government stands in opposition to Measure L, which is fueled by a belief in color-conscious government.

Calle kicks off the interview with a “Tale of Two Anaheims”-inspired question, saying there’s a lot of unrest” in Anaheim, and that “a lot of people” think it’s a “corporate-run town” where workers “don’t have much of a voice,” and asking Galloway how she’ll give “a voice to the average worker in Anaheim.”

Galloway responds by saying the by “virtue of what I am and what I do” she’s “positioned differently” to provide the “different kind of leadership” she thinks the city needs, and then returns to the topic of the 2012 riots

“But wasn’t the current mayor an advocate for the people who were rioting and their issues?”

What issues are those? “Issues” like claiming the Anaheim police are racists and murderers who roam the streets looking for young Latino men to beat and kill? Rioters weren’t clashing with police and vandalizing businesses in order to press for the right to vote on economic subsidies for hotel development.

McEwing follows up with this doozy:

“But to Brian’s point, how do you break away from the basic corporate structure of Anaheim?”

Yes, Lorri – how will you transcend the superstructure and strip away the false consciousness of the lumpenproletariat? Can the question be any more trite and superficial?

During the panel’s question of Galloway about stadium negotiations with the Angels, Joseph Perkins queried her:

“What about the proposal by Mr. Moreno to develop that city-owned property around the stadium?”

A perfectly appropriate and relevant question in terms of the basic topic, but flawed by being factually incorrect: the proposal in the negotiations MOU for Moreno to develop part of the stadium district did not come from Moreno – it came from the city.  That’s a significant point, especially since Mayor Tait has spent the last year painting the Angels of trying to take advantage of Anaheim taxpayers.

Future “You Decide 2014” segments will feature the other major candidates for Anaheim mayor and city council. In fact, the interview with Lucille Kring aired last night, although I haven’t watched it yet. Perhaps the panel might consider asking questions such as: