Where Are Anaheim’s “Watchdogs” When It Comes To “Yes on Measure L” Funding?

As I reported on Thursday, contributions from unions and left-wing political groups to the Yes on Measure L campaign now total more than $200,000. It could be more: we don’t know how much the campaign received during July, prior to the beginning of 24-hour reporting of contributions of a $1,000 or more.

However, the contributions paint a very clear picture that shifting Anaheim City Council elections from an at-large to by-district basis is very important to these outside special interest groups.

One of those left-wing interest groups is San Francisco-based PowerPAC.org, which is one of the largest donors to the Measure L campaign, kicking in $45,000. I posted some background on this left-wing donor aggregator last month. The group describes itself this way in the San Francisco Bay Area Progressive Directory:

“PowerPAC directs financial and human resources to strategic local and state legislative fights, ballot initiatives, and other campaigns by organizing donors who are committed to social justice politics. We identify priority areas for investment and help donors achieve maximum political impact with their political giving.”

Who are those donors? Nobody but PowerPAC.org and its donors know the answer to that question. The $45,000 donation to Measure L came from the PowerPAC.org Voter Fund, and according to the California Secretary of State, that $45,000 came from PowerPAC.org.

Which donor(s) gave that $45,000 to PowerPAC.org? Your guess is as good as mine. The left-wing advocacy group doesn’t disclose its donors. I have called and e-mailed PowerPAC.org a number of times, and am either ignored or given an insincere promise that someone will get back to me.

The irony is that those Anaheim politicos and activists who are supporting Measure L also love to denounce the influence of “special interests” – and yet they are mute when it comes to large, untraceable sums being spent by outside and unknown special interests to re-structure how Anaheim citizens elect their city council.

PowerPAC’org’s Left-Wing Track Record
While PowerPAC.org won’t disclose exactly why they’re funding the Yes on Measure L campaign, it’s pretty clear from their past campaign activity what kind of policies they hope by-district council elections will produce in Anaheim.

During the 2007-2008 election cycle, it spent $409,517 on “electioneering communications” benefiting Democratic candidates.

In 2010, it spent $252,907 in support of left-wing Kamala Harris’ successful campaign for Attorney General; against Proposition 26, a constitutional amendment to require a two-thirds majority to raise taxes; and against Proposition 23, which would have suspended job-killing state regulations until unemployment declined.

In 2014, PowerPAC.org has spent at least $42,700 on behalf of Democratic candidates around the nation: 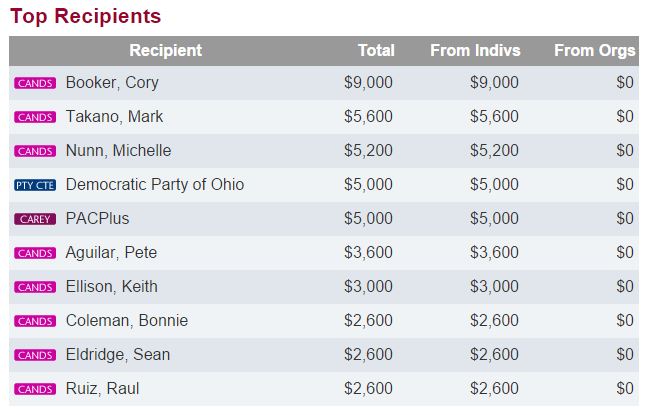 Where Are The Watchers?
As I noted before, there is a deafening silence on this issue from the self-proclaimed watchdogs of transparency and “special interest influence” in Anaheim.

As yet, CATER jefe Cynthia Ward has not thundered self-righteously during public comments about a flood of special interest dollars from outside Anaheim trying to dictate to residents what kind of city government they shall have.

CATER lawyer and verbose blogger Greg Diamond is obsessed with knowing who encouraged (or in Diamond’s paranoid parlance, “ordered”) OC Assessor Webster Guillory to change his mind and seek another term — as if that were illegal — but has nothing to say about the dark money fueling the Measure L campaign.

Not that this is surprising, since this claque doesn’t really care about transparency for its own sake, only as far as it positively or negatively impacts their political objectives.