Yesenia Rojas Arrested For Outstanding Warrant; Says Police “Are The Gang” in Anaheim

Yesenia Rojas, an SEIU-USWW organizer from Anna Drive who has become a de facto media spokesperson for that neighborhood and an active supporter of by-district council elections, as arrested this morning by Anaheim police. According to posts by her network of supporters and friends on Facebook, Rojas was brought in on an outstanding warrant for either interfering with the justice of the police, i.e. obstruction of justice.

Rojas was released on $10,000 bail at approximately 11:00 p.m.; the OC Labor Federation reportedly assisted with posting the bail.

“Converge at the station. They will freak out and let her go.” 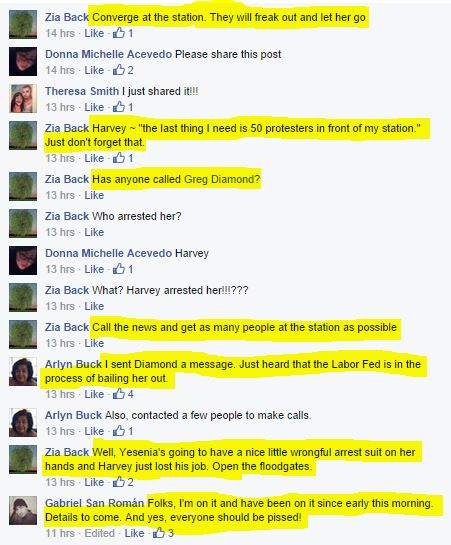 Clearly, they have their community organizing/political pressure tactics down pat.

Cynthia Ward chimed in Acevedo’s Facebook page with some paranoid advice, with the latter responding appropriately to Ward’s hyperventilating:

In a story posted this morning on OC Weekly’s blog, Gabriel San Roman reports that according to Rojas, she called APD Deputy Chief Jim Harvey to invite him to some neighborhood events, whereupon Harvey informed her there was a warrant for her arrest:

Rojas walked into the Anaheim Police Department headquarters that afternoon to turn herself in at Harvey’s suggestion. After meeting with him, she was booked and held on $10,000 bail for charges of interfering with police before being released late into the night.

The police are mum about the details, but back on September 6, neighbors and family in Anna Drive held a surprise party for Rojas’ 37th birthday. Just before 10 p.m., Rojas had just invited her neighbor Donna Acevedo, a city council candidate who’s is the mother of someone killed by the Anaheim PD, to come to the fiesta when a mother came screaming for help.

In a nearby alley, Anaheim police were arresting the mother’s son. Residents quickly rushed to the scene, whipped out their smartphones and began filming. Footage seen by the Weekly shows gang unit officers standing stoically in the alley keeping people away from the scene.

Rojas walked with her hands up, Ferguson-style, berating police to respond; she claims a cop grabbed her arm and pulled it down. The activist tried clearing a pat through the crowd as officers carried a handcuffed man to the street and into the backseat of a gang unit patrol car.”Why are you taking him?” residents can be heard screaming. “Let him go!”

“We were trying to get names, badge numbers, and they didn’t even answer,” Rojas says.

Police units eventually left the alley to angry residents telling cops to get out of their neighborhood. “I don’t see any changes,” Rojas said, about whether relations have improved between the police and Anna Drive residents. “It’s the same.”

Imagine to gumption of the police arresting a gang member for violating a gang injunction, or enforcing drug laws. When will that change?