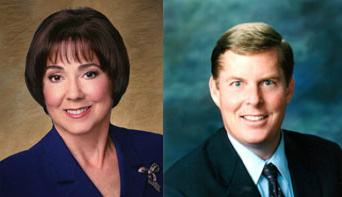 This came over the transom for the Lucille Kring for Mayor campaign:

“Lucille’s dedication to the City of Anaheim, her record of service on behalf of Anaheim residents and her commitment to the policies, programs and priorities that are critical to Anaheim’s future are just three of the many reasons why I believe she is the best candidate to serve as our next Mayor,” Pringle said.

“No one can say that Lucille ever felt the need to divide people to achieve her goals for Anaheim. In fact, Lucille is a proven consensus builder, which this city desperately needs in the office of Mayor.”

Pringle, who served as Mayor of Anaheim from 2002-2006 and was reelected with nearly 80% of the vote to serve again from 2006-2010, said he is disappointed that his successor has on numerous occasions taken positions that are not in the best interests of the city and its residents.

“In 2010 I supported a former Council member for Mayor, and he was elected” Pringle said. “However, in the almost four years since that time, the Mayor has opposed the expansion of the Convention Center, voted against programs and projects that would benefit Anaheim’s economic growth and, perhaps most importantly, he has used his position and office to the detriment of the public safety of Anaheim residents.”

“Lucille Kring and I share a vision for Anaheim, a vision of vibrant economic prosperity, safe and secure neighborhoods and strengthened relationships among all of our diverse communities. I am confident that as Mayor, Lucille Kring will make our community an even better place to live, work and raise our families.”