Several hundred thousand dollars have been contributed by outside organizations to ensure Anaheim voters approve Measure L, a vote to change the process for electing members to the Anaheim City Council. Does Anaheim need to elect members by district instead of at-large? (I also ask the same question regarding Measure M: Does the city council need six members instead of four?) What is the demonstrated need to switch to a different basis for electing council members? Has want been mislabeled as need?

A good reason for passing Measure L would have been that the current system for electing council members does not result in the equal distribution of city resources and services. Mayor Tait and Council Member Brandman (2014) falsely imply a disparity, writing that passing Measure L “ensures neighborhoods get their fair share of city services.” In fact, the distribution of city dollars spent per capita in Anaheim has been remarkably similar. For example, the distribution for 2012 and 2013 is almost the same (City of Anaheim Finance Department, 2013, p. 12): 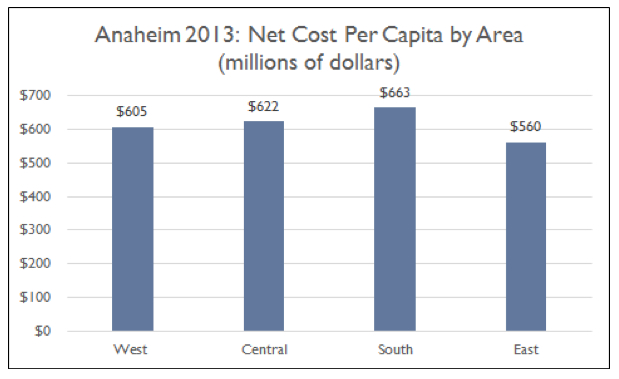 Tait and Brandman offered no substantive reason or argument in their ballot verbiage for passing Measure L. Behold the purported reasons and implications—and note the absence of a shred of evidence for their support. 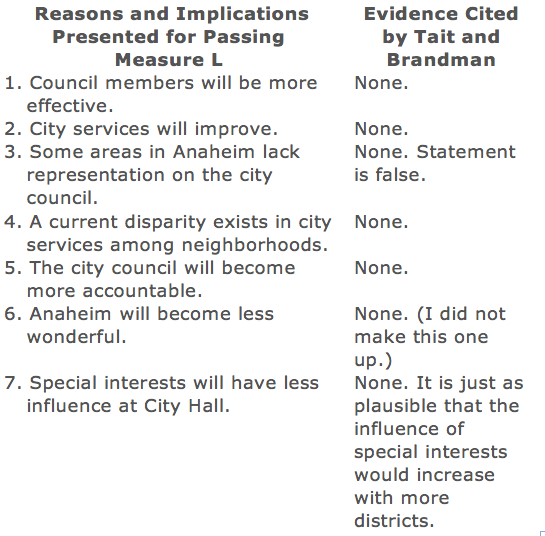 Ballot measures such as Measure L, sponsored and financed by special interest groups and organizations, particularly outsiders, more often represent wants, not needs. To date, no compelling reason or argument has been presented to voters for approving Measure L (or M). Despite the warning from Tait and Brandman, and regardless whether Measure L passes, Anaheim will remain “a great place to live.”