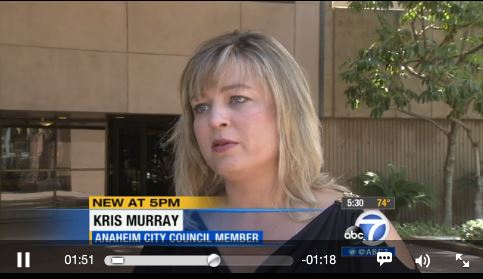 End of the day, this story hurts, rather than helps, Tait. To the extent news coverage of Angels negotiations has focused on the mayor, it has been on his vocal criticism of what has been represented (inaccurately) to an Angels demand for the right to develop part of the stadium district for a $1 annual lease payment. After a year of that, the coverage has now shifted to the Angels responding by terminating negotiations and looking to move to Tustin or elsewhere.

The most single most powerful re-election tool Tom Tait has is his ballot title: “Mayor of Anaheim.” Most voters think of the mayor as a sort of chief executive, rather than what the post really is: presiding officer at council meetings, primary city spokesman and primus inter pares. Consequently, voters will tend to credit whoever is mayor when there is good news about Anaheim city government – regardless of whether or not such credit is deserved. By the same token, they will tend to blame the mayor for bad news – like the breakdown of negotiations with the Angels and the correspondingly increased likelihood they will leave Anaheim.