A few days ago, Jose Moreno, the left-wing academic and candidate for Anaheim City Council, posted this on his Facebook page: 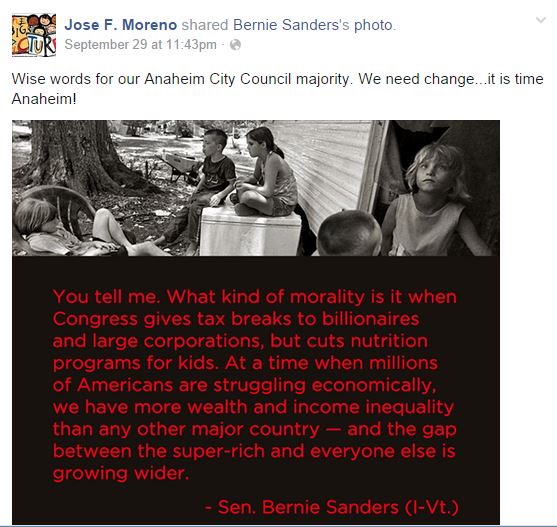 Bernie Sanders, for those who don’t know, is a self-described socialist. His solution for “income inequality” is to classic left-wing “soak the rich” tax increases and re-distributive economics combined with restricting our 1st Amendment political free speech rights (to make it harder for “the wealthy” to fight back when the government confiscates more of their money).

Never mind that the “income inequality” that so bothers Sanders, Moreno and other leftists has worsened during the Obama Administration’s regime of tax increases, heavy regulation of the free market and huge increases in federal spending. Never mind that the program of progressive taxation and wealth redistribution is not only barren economics but also contrary to justice.

Yet these are the anti-free market economics that Jose Moreno embraces. If elected, not only would he do his best to bring these destructive, unjust policies to Anaheim, but he would work to elect to the Anaheim City Council others who share his leftism. He’s already working to elect a farm team to Anaheim school district boards: candidates like teachers union activist Ryan Ruelas and OCEA activist Al Jabbar (an appointed ACSD incumbent).

What is mystifying is how some Republicans and self-described conservatives in Anaheim have become so obsessively focused on a couple of areas of disagreement with other conservatives and Republicans that they are willing vote for a left-wing fox to guard the free market chicken house.