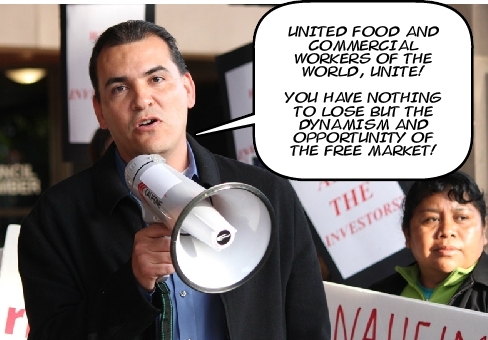 The United Food and Commercial Workers union has funneled a $20,000 independent expenditure for Jose Moreno, the left-wing academic running for Anaheim City Council.

UFCW ran the money through PowerPac.org Voter Fund, depositing $36,500 in mid-September and expending it as follows yesterday:

Why would the UFCW funnel the money through PowerPac.org Voter Fund, rather than a direct IE? According to Democratic sources, this represents the long arm of AFL-CIO Executive Vice President Tefere Gebre: moving it through a reputable, national committee makes it easier for Gebre to control.

Gebre was executive director of the Orange County Labor Federation before nabbing the number two spot at the AFL-CIO. He famously launched a tirade the night of the June 2012 primary, denouncing moderate Democratic candidates as “corporate whores.”

According to my sources, Gebre has been working it on behalf of his friend Moreno, who is exactly the kind of left-wing ideologue Gebre wants to see in elected office.

It’s additionally interesting that Gebre is exerting himself on behalf of a city council candidate 3,000 miles away – a candidate who was denied the endorsement of the OC Labor Federation, our local AFL-CIO affiliate — when he presumably has bigger fish to fry in what is shaping up to be a GOP tidal wave at the national level.