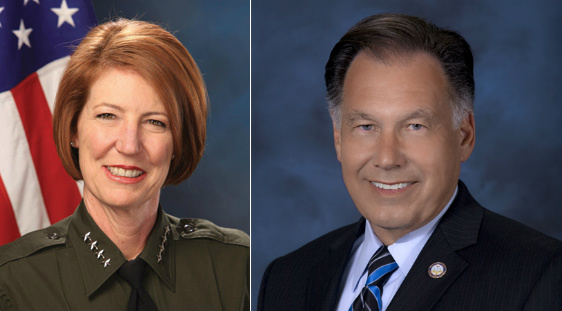 This came over the transom a little while ago from the Kris Murray campaign:

(Anaheim) – Anaheim Mayor Pro Tem Kris Murray is endorsed by a broad coalition of public safety leaders and organizations in her re-election campaign for city council.

“Kris Murray is a leader when it comes to public safety,” said Orange County Sheriff Sandra Hutchens. “Her record as a member of the Anaheim City Council reflects just that. She has been a strong supporter of improving public safety, pushing for the hiring of additional sworn officers. She has also been a vocal advocate for after-school programs and extracurricular activities, giving children a safe place to play and learn.”

“Kris Murray cares about public safety,” said Orange County District Attorney Tony Rackauckas. “I’m proud that the District Attorney’s office has been a partner in Anaheim’s GRIP (Gang Reduction and Intervention Program), a model for the county. She’s a fierce advocate for protecting neighborhoods and families, and I’m pleased to support her returning to the city council for another productive term.”

“Ensuring the safety of residents is one of the key functions of local government. Kris Murray has a strong record of support for public safety and keeping Anaheim neighborhoods safe from gangs, drugs, graffiti, prostitution, and crime. Her 40 in 4 initiative continues that record by prioritizing the hiring of 40 additional police officers over the next 4 years. Anaheim police officers are proud to support Mayor Pro Tem Kris Murray in her re-election,” said Anaheim Police Association President Kerry Condon.

“Kris Murray has been a great partner in working to keep Anaheim communities safe. Kris has kept her promise to make public safety a priority. With her leadership, Anaheim has hired firefighters for the first time in over 5 years, increased training of new paramedics and other specialties, and has continued to fight to bring fire department staffing back up to pre-recession levels and beyond. Anaheim firefighters offer their full support to Kris Murray in her re-election campaign to the city council,” said Jim Ramirez, President of the Anaheim Firefighters Association.

“I am honored to have the support of public safety. Our police officers and firefighters are working hard to keep our city safe every day. If re-elected, I will continue to fight for improved police and fire resources and be there in total support of our first responders,” said Kris Murray.

Murray is seeking re-election to the Anaheim City Council and is supported by a broad coalition of community and business leaders. To see the full list, click here. Building on her successful first term in office, Murray will continue to focus on jobs and economic development, improving Anaheim’s neighborhoods, and public safety.