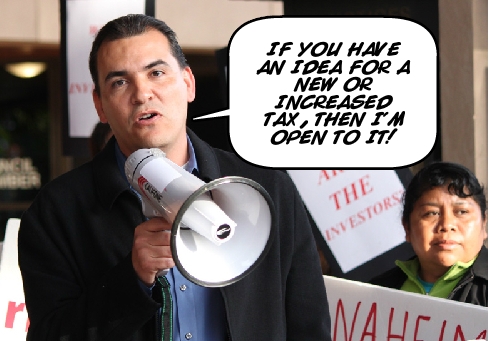 Last night’s candidate forum sponsored by the Anaheim Buzz and the Anaheim Hills Community Council was by and large a civil event, with a few flashpoints during the evening.

One of the most illuminating was at the beginning of the council candidates segment. The first question was on taxes and kicked off with a “speed round” in which the candidates were asked to give a yes or no response to whether they supported a range of new or increased taxes.

Left-wing academic Jose Moreno, who seemed to have a bit of a chip on his shoulder throughout the forum, was the only candidate who did not provide a yes or no answer.

The other candidates on the podium – Mayor Pro em Kris Murray, Councilwoman Gail Eastman, Team Tait member James Vanderbilt – each responded to every tax with a crisp “no.”

Not Moreno. Each time he was asked about a tax, he leaned forward and answered “I’m open to the idea” with a sly, slight smile on his face:

Do you favor a gate tax?

An increase in the local sales tax?

In the context of Moreno’s record and philosophy, “open to the idea” sounded like code for “I’ll be easy to convince.”

Juxtaposed against Moreno’s openness to increasing taxes were his regular claims that he’d protect taxpayers? At what point? After taxpayers have been picked clean by all the taxes to which Moreno is so open?