In Case You’re Wondering Just How Radical Jose Moreno Is…

On the campaign trail, left-wing academic Jose Moreno talks a lot about “protecting taxpayers.” As noted in an earlier, it’s an open question how much of taxpayers would be left to protect given the range of new and increased taxes Moreno would support if given the chance.

But for those still in denial of how radical Moreno’s politics are, here’s another example from an October 25, 2013 post on his Facebook page: 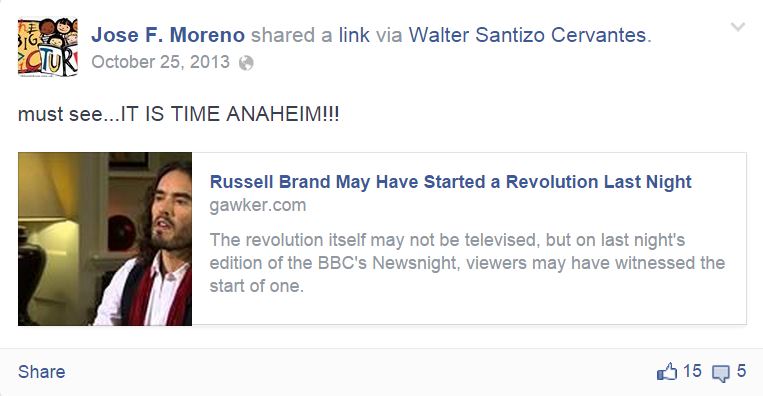 Moreno call this interview with British actor Russell brand a “must see” followed by his “It is time Anaheim” slogan, which is how Moreno and others of Anaheim’s radical set indicate their approval for a policy or governmental action.

What does Brand say that Moreno considers to be “must see”? Brand rattles off a diagnosis of what he considers wrong with modern capitalist society – a diagnosis that mirrors Moreno’s public statements. When interviewer Jeremy Paxman asks Brand what his solution is (at about the 4:35 mark in the video), Brand gives this impassioned tirade:

“I think a socialist egalitarian system based on the massive re-distribution of wealth, heavy taxation of corporations, and massive responsibility for energy companies exploiting the environment. The very concept of profit should be hugely reduced. [British Prime Minister] David Cameron says profit isn’t a filthy word – I say profit is a filthy word because wherever there is profit there is deficit.”

“Profit is a filthy word”?

Other than a radical left-winger (and the folks who populate the anti-cop marches in Anaheim each summer), who gets jazzed up by that kind of rhetoric and urges others to bring that kind of “revolution” to Anaheim?  Who other than a left-winger from academia doesn’t understand that such economics punishes initiative, retards liberty and only leads to scarcity and greater poverty?

And this is the ideology to which – unbelievably — Tom Tait is trying to give a seat on the Anaheim City Council dais.