How important to Mayor Tait is re-signing the Anaheim Angels for 20+ years? For members of the Anaheim City Council and the Angels, negotiations to achieve a new lease agreement have not been a surprise. Let’s review Tait’s substantive comments about the lease in his State of the City addresses since 2011. 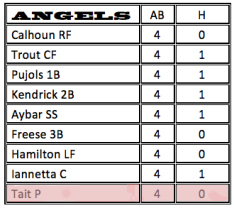 January 2012: The Angels signed two new players–Albert Pujols and pitcher C. J. Wilson. I know I’m not the only one in the room who is excited for spring training.

February 2013: I’d like to join Angels Baseball in welcoming Josh Hamilton to Anaheim. . . . He joins a stellar line up, including the American League Rookie of the Year, Mike Trout, and Albert Pujols.

January 2014: Even though we didn’t make the playoffs, the team drew more than 3 million fans and provided plenty of excitement. One highlight . . . was Mike Trout hitting for the cycle.

No doubt about it: Mayor Tait’s highest priority has been effecting a new lease agreement between the city and the Angels—and the reason he pitches this topic during each annual State of the City speech.