In a condescending, inaccurate mailer funded by the Tait Family Trust, Mayor Tait accuses council women Gail Eastman and Kris Murray of giving a “sweetheart” deal to the city’s public employee unions. The mailer is covered with feminine touches such as hearts, lipstick marks and pink-colored lettering. The Tait family’s mail consultant must have been in a hurry because the tea doilies and aprons were left out. 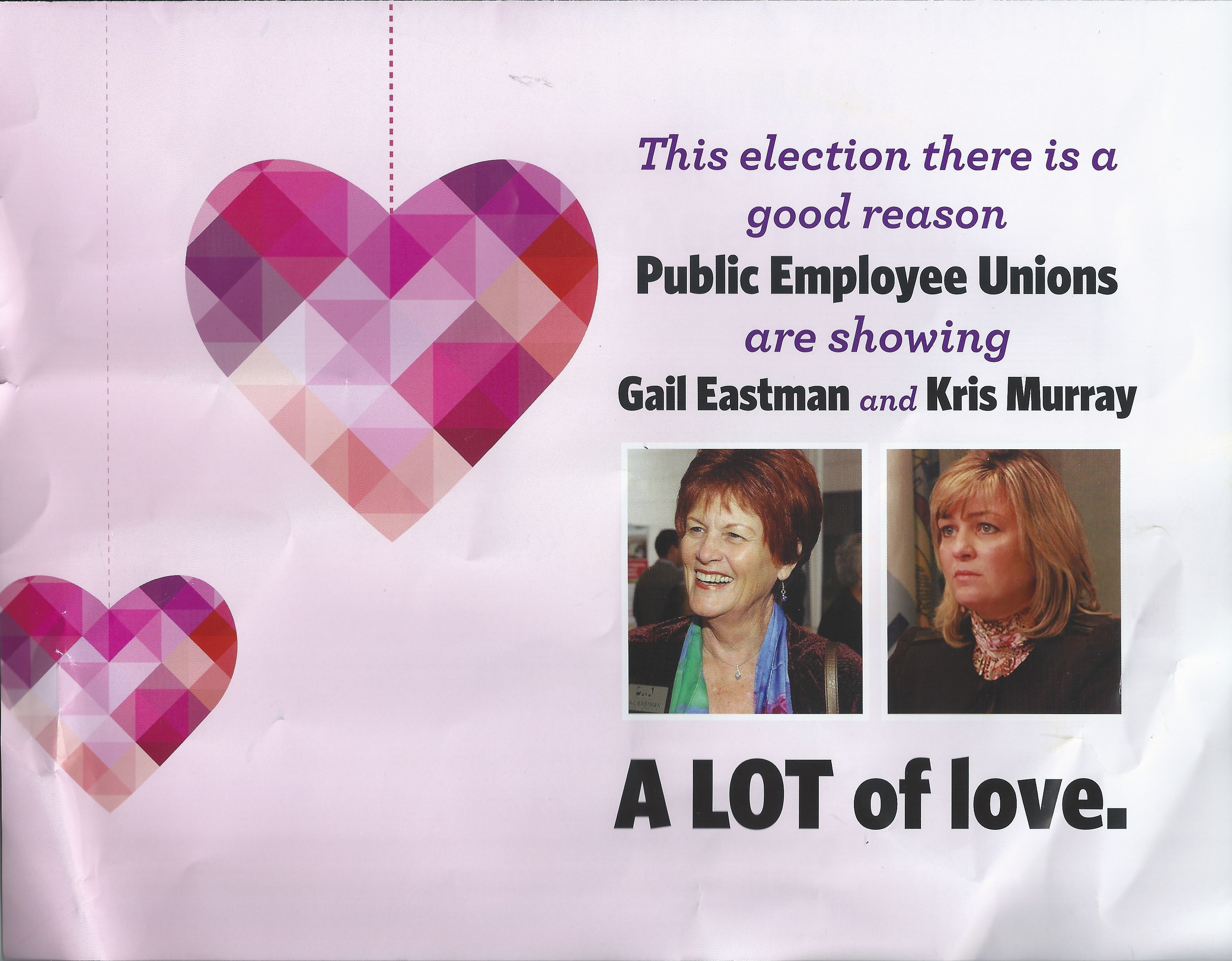 The Tait camp might want to consider that more than a few women voters are more likely to be offended by the mailer’s chauvinistic tone, which is quite out of place considering the reason Tait’s hand-picked candidate Doug Pettibone dropped out of the race (or rather, was thrown under the bus by the Mayor).

If Murray and Eastman were men, does anyone think the mailer would have looked like this?

The irony is that Mayor Tait, in previous roles as councilman, voted for one of the city’s largest pension increases: the 3@50 (three percent at age 50). Tait also fails to mention that his own part-time council assistant now receives the highest contribution to her pension by the city as a percentage of salary. If Tait is so committed to pension reform, why does he fight so hard to keep his personal city staffer on the pension gravy train?

The reality is that the 2012 pension-reform measure, which Tait opposed, saw Murray and Eastman vote to reduce public-employee pensions for every full-time employee.

In pink text, adorned with hearts and kisses, Tait’s mailer tries to mislead voters into believing “public employee unions” are supporting the two council women due to their approval (part of a 4-1 vote) of an 18-month Memorandum of Understanding with the Anaheim Municipal Employees Association. The implication being made is there was a quid pro quo.

What the Tait family-funded mailer fails to note is that neither Murray nor Eastman have accepted campaign contributions from the AMEA. It’s difficult to have a quid when there’s no quo.

Furthermore, Murray and Eastman have never been endorsed by the Orange County Employees Association, the county’s largest public employee union, with which the AMEA is affiliated.  In fact, the OCEA spent yens of thousands of dollars on mailers to Anaheim residents attacking Murray and Eastman for their support of the GardenWalk project, just as Tom Tait has been doing. Those attacks were part of the OCEA-funded “Take Back Anaheim” campaign, which Tom Tait supported. And it was the OCEA that paid for campaign signs promoting Tom Tait’s council slate in 2012, and spent hundreds of thousands of dollars trying to elect Tait’s anointed council candidate that year, John Leos.

When you look at the facts, the council member who has really been the political ally of the city employees union has been Tom Tait!

Both Murray and Eastman are supported by the city’s police and fire associations, but those endorsements have more to do with Murray’s and Eastman’s strong support for public safety, compared with Tait. Does anyone expect the police officers association to endorse a mayor whose sympathies are with relatives of gang members who come to council meetings to attack Anaheim police as murderers; a mayor who feels it necessary to publicly give his guarantee to professional anti-cop protesters that Anaheim officers will not retaliate against them for saying such things? After all, if this IE campaign by the Tait Family Trust succeeds, it will result in electing left-winger Jose F. Moreno, whose heart is also with the anti-police activists; they are certainly supporting him.

In fact, Murray and Eastman recently stood with the Anaheim Police Department to honor Bruno, a police dog shot in the line of duty while protecting his handler. Tait opposed a monument to Bruno and all service animals, at the same time offering support for a public display to glorify gang members who terrorize the city’s most vulnerable neighborhoods. In response, OC District Attorney Tony Rackauckas took Mayor Tait to task for his affinity with Anaheim’s street gangs.

Anaheim voters are sure to see through the not-so-subtle sexism of this mailer. The truth is that the women of the Anaheim City Council have not waivered in their support of taxpayers, neighborhoods and economic development, despite the mayor’s relentless attacks. Tait’s ecord is of joining with public employee unions to attack his GOP colleagues, and now serving as Republican front-man for a union-sponsored initiative intended to produce a Democratic-majority on the City Council. The truth is that more than anyone else, it is Tom Tait, if he is successful in his efforts, who will open the door to union domination of the City Council.