Common Core: Another Stairway to Nowhere

The Elementary and Secondary Education Act (1965) signed by President Lyndon Johnson was revised seven times, most recently by President George Bush when he approved No Child Left Behind (NCLB, 2002). The effect on student performance of NCLB was near zero, so the Obama administration created a new program, Race to the Top, excusing states from fulfilling the goals of NCLB if they agreed to adopt Common Core: assumed educational standards or instructional goals in English and mathematics for all students in all grades. Nevertheless, it is asserted that Common Core is not a national curriculum (Common Core State Standards, 2014a). 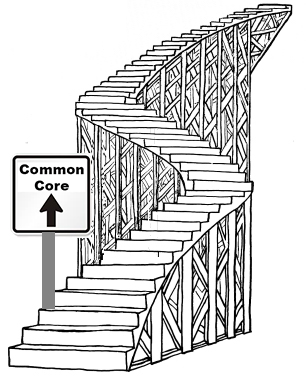 To date, 43 states, including California, have adopted Common Core for use in public schools. It is just as likely, however, that its effect will the same as previously adopted educational programs supported by the federal government to increase student achievement: zero effect.

Despite the spending of billions of dollars by the federal and state governments, reading and math scores of students aged 9, 13, and 17 years on measures such as the National Assessment of Education Progress (2013) have remained almost unchanged for more than 40 years. This figure shows reading scores (1971-2012)—although math scores during the same period are almost a mirror image: 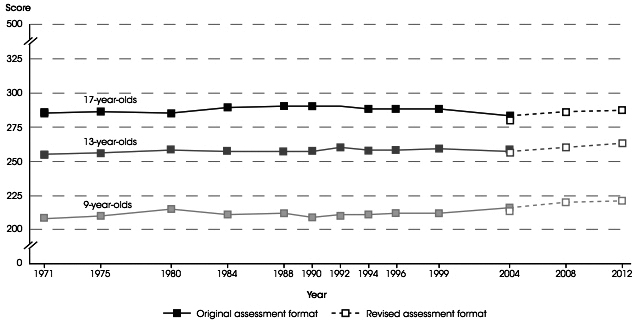 Common Core is intended “to help prepare students for college, career, and life [by identifying] what students are expected to learn at each grade” (Common Core State Standards, 2014c). It is purportedly evidence-based, reality-based, and research-based. Absent, however, is ongoing research or any review of the outcomes of Common Core—a basic principle of any real research-based activity.

In fact, Common Core is the latest form of edubabble for which California has approved spending more than $1,200,000,000 to implement for training teachers and buying instructional materials and technologies. Not surprising is that no substantive evidence has been presented that establishing standards for young children leads to later success. Moreover, a fundamental assumption of Common Core is severely flawed: Not every person should attend, or graduate from, college. A college degree does not ensure success as an adult any more than the absence of a college degree ensures failure.

Educational historian and researcher Diane Ravitch (2014) concluded: Common Core will be “the money pit that consumed American education. The sooner it dies, the sooner schools and teachers will be freed of the Giant Federal Accountability Plan hatched in secret and foisted upon our nation’s schools.”

The bad news: Common Core is another stairway to nowhere—a very costly stairway that will do nothing to improve educational outcomes in our nation’s public schools. But even worse news: As soon as Common Core dies, government will likely establish another ineffective educational activity or program that will cost taxpayers billions more.