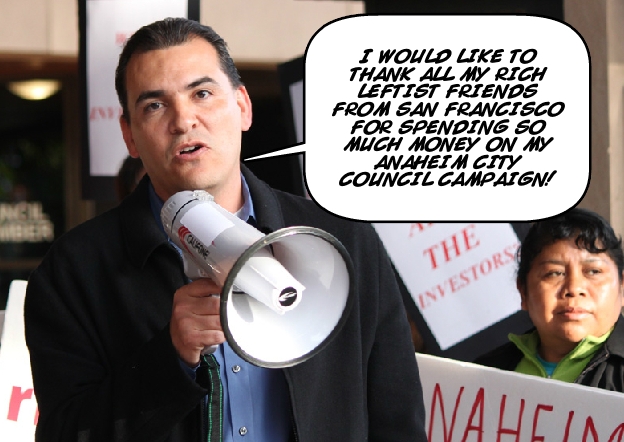 Judging by the campaign reports, the left-wing community in San Francisco feels very strongly about the importance of electing Jose F. Moreno to the Anaheim City Council, 600 miles away.

PowerPAC.org Voter Fund, a left-wing political committee based in San Francisco, has so far spent almost $54,000 in independent expenditures for Moreno’s council candidacy.

A good chunk of that money comes from wealthy liberal heiress Susan Sandler of San Francisco, whose parents founded Golden West Savings. Sandler gave $65,000 to PowerPAC.org Voter Fund in May of this year. $45,000 of that was then donated to the Yes on Measure L (by-district council elections) campaign. Election wins for Moreno and Measure L are top priorities for Sandler, who has also made the maximum $1,900 individual contribution to Moreno’s campaign.

Another San Francisco left-winger lending a hand is Steve Phillips – progressive activist, attorney and husband of Susan Sandler.  On October 1, Phillips gave $60,000 to the PowerPAC.org Voter Fund, helping fuel the committee’s IE campaign to elect fellow leftist Jose Moreno to the Anaheim City Council (and most likely to help boost the Yes on L and M campaign).

Sandler and Phillips are all about leveraging their wealth to “build progressive infrastructure” – sort of like mini versions of George Soros:

“[Sandler] has long been focused on strengthening progressive infrastructure. She is president of the donor collaborative Progressive Era Project that builds infrastructure in California to move forward a bold, social justice policy agenda. Sandler is also chairperson of the Board for the Campaign for Community Change and sits on the board of directors for the Center for American Progress. 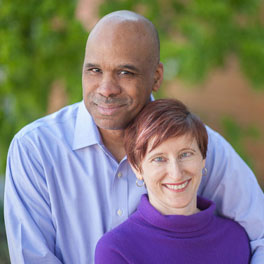 Phillips is a longtime donor activist who works on the state and national levels in progressive donor organizing and infrastructure-building. Over the past 20 years, he has worked as an education reformer, attorney and elected official. Phillips is founder and chairman of PowerPAC.org, a national advocacy organization committed to increasing voter participation in underrepresented communities. He sits on the boards of Progressive Majority, electing progressive champions to office throughout the country; and the Democracy Alliance, a national collaborative of the country’s largest progressive donors working to fund progressive infrastructure nationally.”

In other words, they spend their riches to build political organizations and modify political/governmental structures in order to elect more progressives to office who will then enact left-wing policies.”

And they have set their sights on Anaheim.

Another super rich Moreno patron from the Bay Area is Quinn Delaney of Oakland, who has donated the maximum $1,900 contribution to Moreno’s campaign. Delaney and her developer husband Wayne Jordan are a left-wing power couple:

Even as New York and the San Francisco Bay have become increasingly unlivable for the working class folks ostensibly best represented by the Democratic party, the super-wealthy citizens of those regions have become all the more important in electing Democrats to office. (Super PACs, anyone?) Take Wayne Jordan and Quinn Delaney, for instance. An Oakland real estate developer, Mr. Jordan and his wife have donated well north of $1 million to Democratic campaigns; the pair were among California’s most significant donors to Barack Obama’s 2008 presidential run and hosted a fundraising event at their home in Piedmont.

But why limit such festivities to the West Coast when you can have something in the West Village for just $5.4 million? Mr. Jordan and Ms. Delaney seem to agree and have just scooped a penthouse at 122 Greenwich Avenue, according to city records.

Ms. Delaney (and her husband) share the Sandler/Phillips duo’s commitment to progressive “infrastructure building.” Delaney has her own non-profit group, the Akonadi Foundation. Her premise is that America is a deeply racist country, and her foundation exists to purge this alleged “structural racism” from American society. Delaney also a long history with (surprise!) San Francisco-based Tides Foundation, including a stint as its chairman. The Tides Foundation, which is closely tied with George Soros and the Occupy movement, is also a funder of the Yes on L and M campaign (to the tune of $20,000).

So what we have here are very rich San Francisco leftists who have dedicated themselves to building political infrastructure in California to support the recruitment, funding and election of progressive candidates who will the enact left-wing public policy. And they have focused a great deal of their money and attention on replacing Anaheim’s at-large council election system with by-district elections, and on electing the Chicano Studies professor Jose F. Moreno to the Anaheim City Council. Keep in mind what Moreno recently told TheLiberalOC.com:

Oh yeah – the PowerPAC.org Voter Fund has also helping the campaign of appointed ACSD Trustee (and OCEA director) Al Jabbar as part of that bench-building.

It isn’t hard to see what is happening here: Anaheim is the target of “progressive infrastructure building” by these rich San Francisco leftists. Unfortunately, too many Orange County conservatives are still blind to this, or in the case of Mayor Tom Tait, are concretely abetting it.