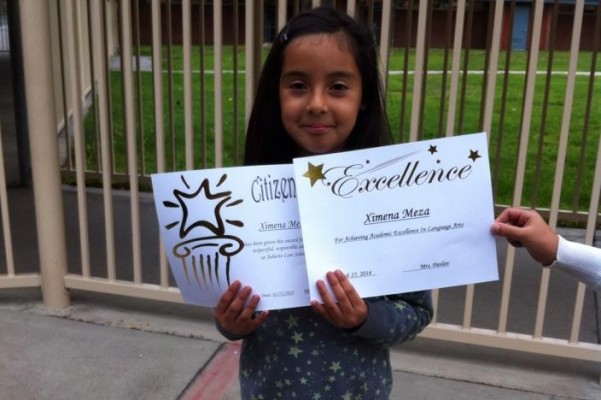 On Wednesday, October 22, 2014 around 7:15 P.M. Anaheim Police Officers were called to the 2300 block of W. Greenacre Ave. to investigate the shooting of 9 year-old Anaheim resident Ximena Meza. Meza had been to the front of her apartment complex playing with her sisters when gunshots rang out. Meza was struck once in her chest by an assailant’s bullet. She was rushed to a local hospital and succumbed to her injuries around 8:00 P.M.

Investigation
In the short time since the shooting, Anaheim Police Department Homicide Detectives have been tirelessly working to find the person(s) responsible for the murder of Meza. The investigation included a community meeting at Brookhurst Park, the interview of numerous witnesses, and the processing / collection of evidence. Preliminarily the investigation suggests two or more suspects drove down Greenacre Ave. from Crescent Ave. in a white vehicle. Near where Meza and her sisters played, a male suspect exited the white car and opened fire with a handgun. His intended targets were a group of men who were congregated just west of where Meza played. Meza and her sisters were caught in the line of fire. The group of men fled the scene on foot while the white car, containing the suspect, sped away. It is believed the shooting was gang motivated. To date, no additional victims have been located.

On October 24, 2014 shortly after 11:00 P.M. two suspects were arrested at the Anaheim Police Department for the shooting death of Ximena Meza. Ricardo Cruz, 19, of Buena Park and Alfredo Miguel Aquino, 20, of Anaheim were arrested and booked for Murder.  They are currently being held, on 1 million dollars bail, at the Anaheim Police Department Temporary Detention Facility. At the time of this writing, booking photographs of the suspects are not available. However, they will be available at the press conference.

Press Conference
Through the media, the murder of Ximena Meza has gained national attention leading to numerous investigative leads. Chief Raul Quezada and members of the Anaheim Police Department will hold a Press Conference to address developments in the investigation and discuss the arrest of the suspects. The details of the press conference are: