The latest example of the topsy-turvy nature of Anaheim politics is a Tait Family Trust-funded attack falsely claiming Councilwoman Gail Eastman is not a good Republican and too close to public employees unions, while simultaneously urging support for Measure L – an  initiative to pave the way for a Democratic take-over of the Anaheim City Council that is sponsored by militant unions, rich left-wing dilettantes from San Francisco…and Tom Tait.

But first, a quick political trivia quiz. What is the difference between these two logos?

The one with three stars is a trademarked logo of the Republican National Committee. The logo with two stars is not, and can be used by anyone. The “Continuing the Republican Revolution” political slate mailer, for example, incorporates the two-star elephant into its logo. Whether it has three or two stars — or one or four, for that matter, the average voter sees a red-white-and-blue elephant and thinks “Republican.”

In mid-October the Eastman campaign sent out this mailer: 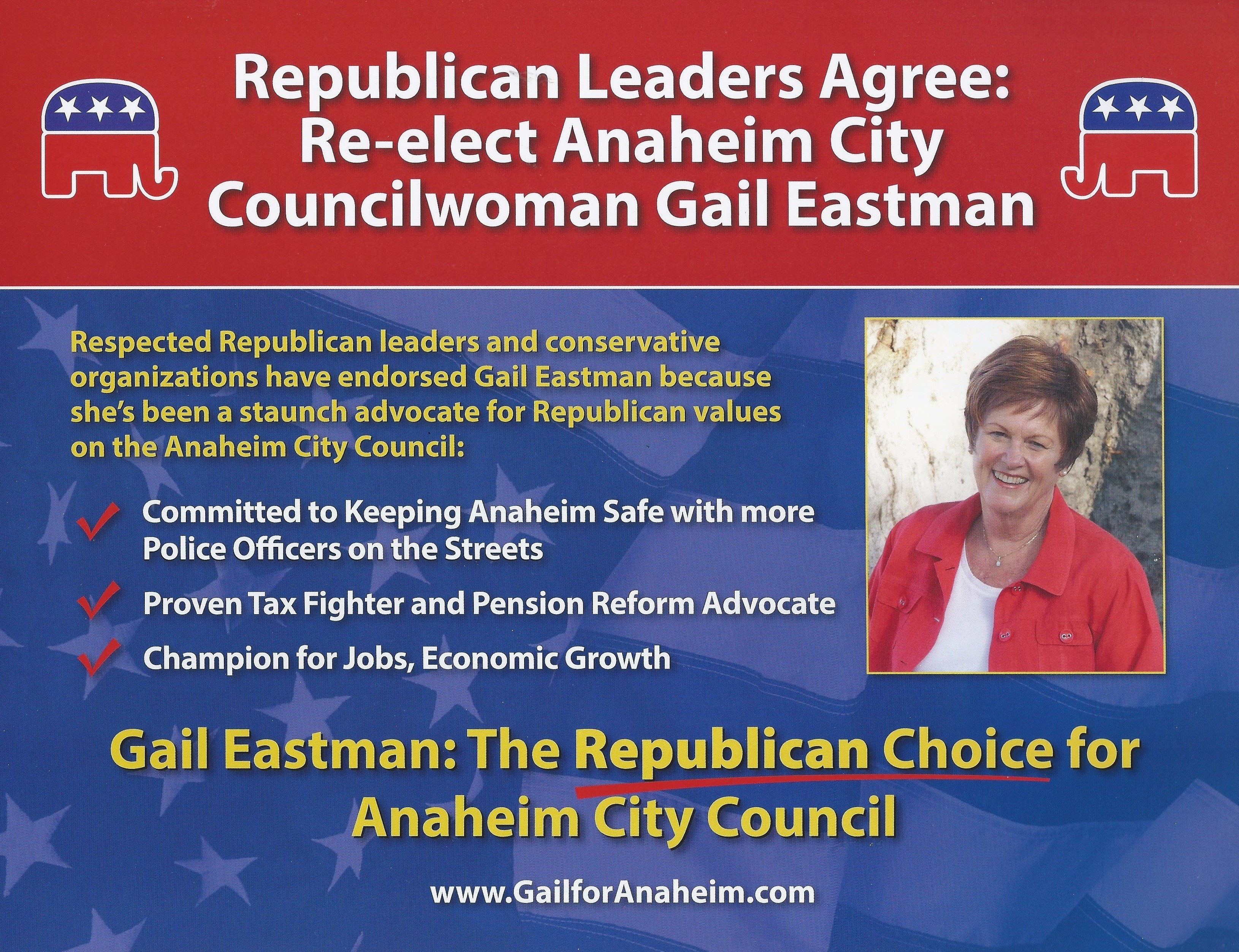 A fairly typical mailer for a Republican candidate to send out; and she is endorsed by the Conservative Republicans of California. However, her consultants mistakenly used the three-star, rather than two-star, GOP elephant logo, although the mailer makes no explicit or implicit claim that Eastman is endorsed by the Republican Party of Orange County. It states, truthfully that she has the endorsement of Republican leaders and conservative organizations.

Still, someone was brought the mailer attention of Republican Party of Orange County Chairman Scott Baugh. The matter could have been resolved with an e-mail or phone call to the candidate and/or her campaign consultants pointing out the logo they used was trademarked and could no be used without permission. Instead, a blistering letter was written taking Eastman to task for using the logo and for accepting campaign contributions from the Anaheim police and fire associations,  Although addressed only to Eastman, the letter was also e-mailed to every Republican mayoral and council candidate running in Anaheim.

Baugh’s e-mail was eventually forwarded to me. My first reaction upon reading the letter was that this was going to end up in a Tait hit piece. I’m not going to say the letter was written and distributed with that intent, but it’s hard not to conclude it was done with the awareness that becoming hit mailer fodder was a highly likely possibility. As noted, the letter was unnecessary since the situation could have been handled with a phone call or an e-mail.

Sure enough, a hit piece, funded by the Tait Family Trust and Home Savings heir Howard Ahmanson and sent via the California Homeowners Association committee that’s been hitting Eastman and Kris Murray for weeks, landed in voter mailboxes last week: 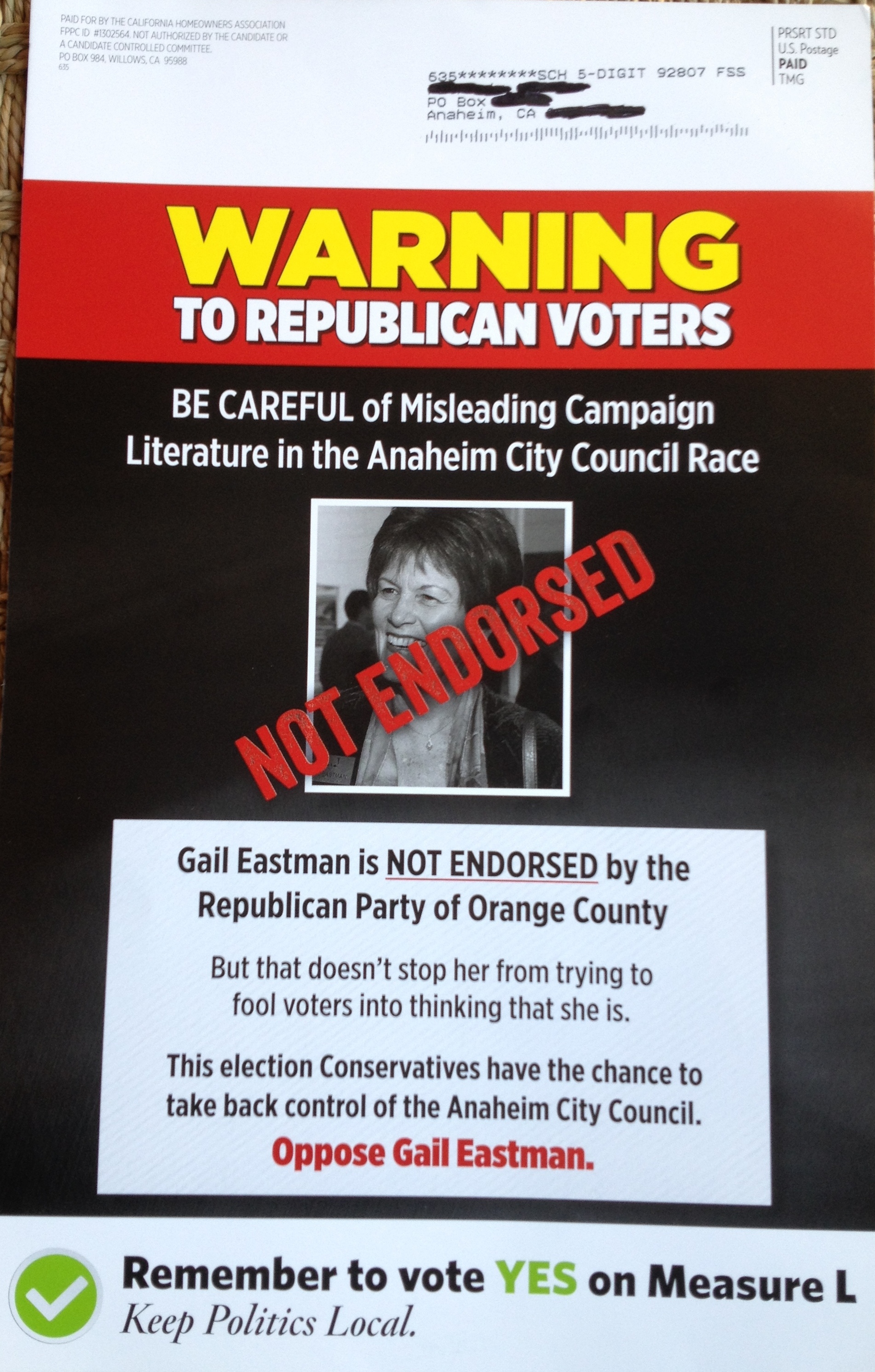 Here we have a mailer trying mislead voters into thinking it was Eastman who was trying to mislead voters. Contrary to the Tait/Ahmanson mailer’s claim, Eastman’s mail piece didn’t claim, either explicitly or implicitly, that she’s endorsed by the Republican Party of Orange County. Taking the claims of the Tait Family Trust/Ahmanson mailers requires assuming an extraordinary level of political sophistication on the part of voters: “Honey, look at this Eastman mailer. It’s using the stylized red-white-and-blue elephant logo with three stars, which is a trademarked logo of the Republican National Committee. Although the mailer doesn’t say she’s endorsed by the Republican Party of Orange County, the use of this trademarked logo — rather than the copyright-free two-star version — forces me to conclude that she has.”

And let’s keep in mind that this attack is funded in part by Howard Ahmanson – who is financially supporting the candidacies of  Democrats Jerry Brown, Sharon Quirk-Silva and Steve Fox!

Measure L: A Suicide Pact for Anaheim Republicans
Compounding the intellectual incoherence of the Tait Family Trust/Ahmanson attack is its coupling this “Warning to Republican Voters” with an exhortation to vote for the by-district council elections initiative Measure L. That’s tantamount to asking Anaheim Republicans to sign a suicide pact. The goal of Measure L proponents is to change the way the city council is elected in order to produce a Democratic council majority – and they’ve been working toward this goal with the full and enthusiastic support of Tom Tait. As he told the Anaheim Republican Assembly last month regarding Measure L:

“So what if our Party loses a few seats, it’s not the end of the world, we’ll just have to try harder!”

Losing seats on the Anaheim City Council certainly seems to be the goal of the Republican Party of Orange County’s current Local Elected Official of the Year. If the Tait Family Trust were to get its way, it would A) replace either Eastman or Kris Murray with radical Democrat Jose F. Moreno – switching out a conservative Republican for someone who would be the most left-wing local elected official in Orange County – and B) be financially supporting a determined left-wing campaign to end Anaheim’s status as the largest California city with a GOP-majority city council.

Here’s at least one take-away: oppose a union/progressive campaign to take-over Anaheim city government but take one dollar in campaign contributions from a police of firefighter union, and you’ll be shunned by the Republican Party of Orange County. n the other hand, vigorously and vocally support this union/progressive initiative to marginalize the GOP in Anaheim while recruiting candidates to defeat two conservative Republican councilmembers – and you too can be declared the OC GOP “Local Elected Official of the Year”!

A “warning to Republican voters” in Anaheim is definitely in order. But this one comes from the wrong folks and is directed at the wrong candidate.