The Tom Tait for Mayor Facebook page posted this yesterday: 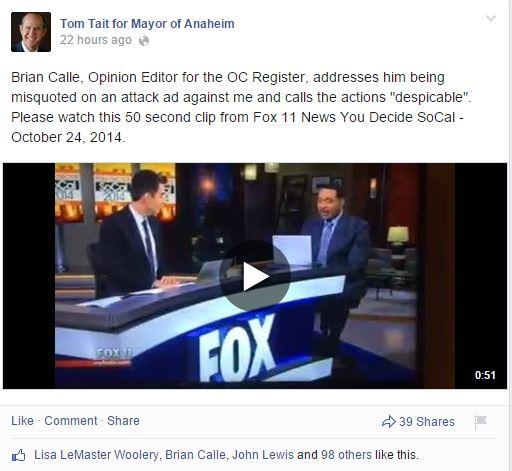 It’s a link to Brian Calle, the editorial page director of the OC Register, on Fox News 11 taking issue with an independent expenditure against Mayor Tom Tait that landed in mail boxes last week: 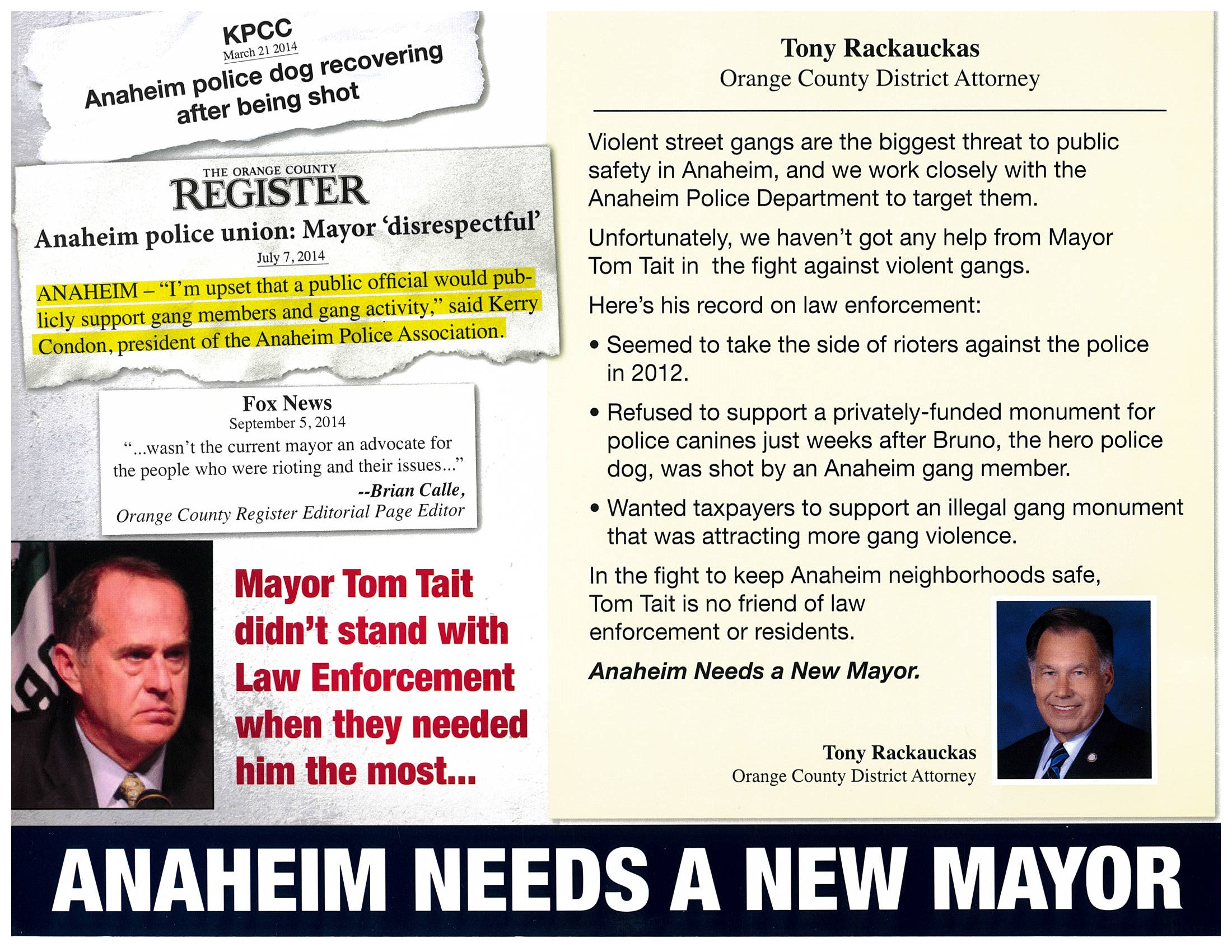 Specifically, Calle, a strong supporter of the mayor, objected to being quoted in the mailer. His co-host, Tony McEwing, raises the topic a single mailer from one municipal election in the enormous LA media market (doubtlessly at the prior request of Calle)

McEwing: We want to talk to you, Brian, about a campaign mailer that has come out recently that actually relates to comments you made on this show.

Calle: Yeah, you know, I was really disappointed to see it happen. I’ve been in politics and in media for a long time, Tony. The former mayor of Anaheim, Curt Pringle, runs a PAC in that city, he’s a lobbyist in that city, and he’s been campaigning against the current mayor, Tom Tait, who we had on the show a couple weeks ago. And he took my words out of context to put on a mailer, and put the name of this show, put the name of the Orange County Register and my name, and basically used these disparaging words that were not true and accurate, against Tom Tait, and I just found it to be absolutely despicable. And it really calls into question some of the things that are going on in Anaheim, and I thought we should address it, and correct it.

This is how the mailer quoted Calle:

It accurately identifies who Calle is and when/where he made the statement, so his objection to mentioning those pertinent facts is a little puzzling.

This is what Calle said on September 5 during an interview with mayoral candidate Lorri Galloway, as well as what he said it in response to:

Galloway: “The riots of 2012 are a chilling reminder of neighborhoods that are still besieged by issues of crime and gangs and graffiti…”

Calle (interrupting her): “But wasn’t the current mayor an advocate for the people who were rioting and their issues?”

How was Calle’s statement taken out of context? None of the meaning was lost. Calle said the mayor was “an advocate for the people who were rioting and their issues.” He said what he said, and it wound up in a mailer.

It would be one thing if Calle went on Fox News 11 and said, “Listen, during our interview with Lorri Galloway, I chose my words poorly and said something I didn’t mean. Here is what I was trying to say.” But he didn’t. Instead, Calle used the TV time to cast the mayor as a victim of “lobbyists” and attack the credibility of Tait critics and opponents – without ever addressing how his comments were allegedly “taken out of context” and leaving viewers no more informed about what he supposedly meant to say.