Here’s another gem from The Moreno Files: 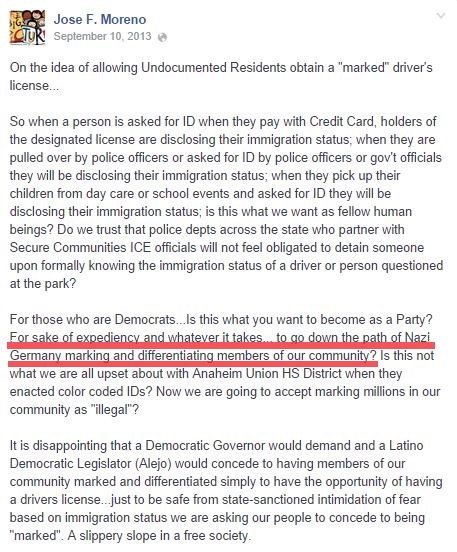 This comment is intellectually incoherent and historically ignorant. How many readers out there think that when issuing a drivers license to someone living in the US illegally, it would be Nazi-like if that DL notes the holder is here illegally?

OK, this is the same guy who has compared Anaheim to a fascist state – but how many readers think that is even a remotely rational comparison?

However, Jose Moreno thinks America would be going “down the path of Nazi Germany” if we gave drivers licenses to people here illegally – in effect, making their status a more legal — but at the same time noting on that legal document that they are not here legally. Oh yeah – that’s just a few steps removed from organized genocide!

On the other hand, Moreno wants the government to “differentiate members of community.” He and the ACLU sued the City of Anaheim to demand changing how council elections are conducted in order to produce a “correct” racial/ethnic balance on the city council. That is a world view based on differentiating people based on race and ethnicity: the people who now serve and have served on the Anaheim City Council aren’t individual citizens and residents, but members of racial and ethnic groups. Here’s how Moreno put it last summer:

Maybe this sort of rhetoric is a habit from spending years in Chicano Studies, where the point is to make students color-conscious and think of themselves in terms of ethnic group membership.  Does Moreno send out targeted mail to households saying “Dear white Anaheim voter…” or “Dear Latino Anaheim voter…”?  Moreno’s thinking is stuck in an intellectual straightjacket that is more antiquated by the day in our increasingly racially-mixed society.

Maybe it’s my old-fashioned ideas about equality before the law and color-blind government, but I find that kind of thinking offensive: the belief that Latinos or Whites or citizens of whatever ethnicity are captives of their pigmentation and heritage, and engage in ethnic groupthink block voting. We’re citizens, not cattle.