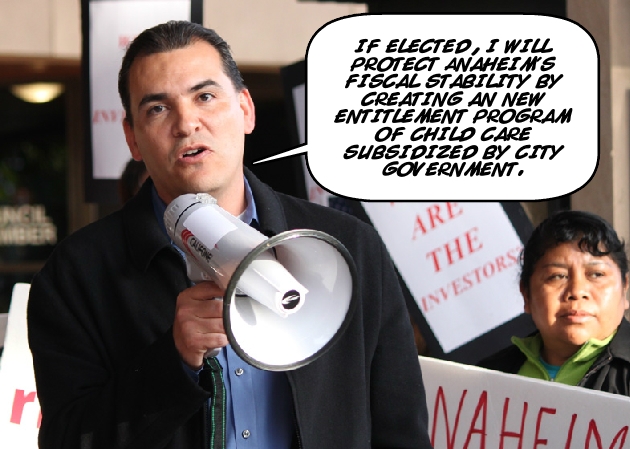 On his campaign website, Jose F. Moreno says he will protect the city’s “fiscal stability.”

Creating a new city-funded entitlement program isn’t how one normally goes about doing that.

Yesterday, the Voice of OC published an article in which Moreno calls for city government to provide subsidized child-care to Anaheim residents – or at least  assume he would limit it to residents. Considering the leftist Moreno’s enthusiasm for massive wealth redistribution and denunciations of profit as a “filthy word,” it’s best not to assume common sense is at work.

In an interview with Voice of OC, he said “working poverty” is the most dire issue facing neighborhoods and talked about shifting the focus of government subsidies from hotels and light-rail to things like child day-care for families.

Let’s put this in perspective. The GardenWalk agreement will rebate a maximum of $158 million back to hotel owners over 20 years (only after the hotel opens for business) but generate an estimated $450 million in TOT revenue to the city – and Moreno thinks that is an irresponsible “giveaway.”  But creating an open-ended entitlement program funded by the city is fiscally responsible?

The local Left has been pushing this idea for years. When OCCORD, an ally of Moreno and tip of the Measure L campaign spear, sued the Platinum Triangle approval a few years ago, one of its settlement demands was for the city to make providing “quality, affordable childcare and pre-school programs for residents and employees at all income levels” a condition of approval for any Platinum Triangle development.

This, my friends, is the kind of liberal policy-making Measure L and by-district elections will bring to Anaheim. By-district elections are the means to Measure L supporters’ end: electing Jose F. Moreno and more like him to the Anaheim City Council. This is why it is being generously and entirely financed by leftist donors and militant unions from outside Anaheim. If you look at the condition of city politics and finances in Los Angeles and like what you see, then by all means support Measure L.

One say this for Moreno: while he employs the jargon the Left uses to camouflage their policy ideas to avoid alarming the petite bourgeoisie, he generally doesn’t hide his leftism. The kind of politics and policies he and his allies want to enthrone in Anaheim isn’t a mystery:they publish their agenda in documents like “Orange County on The Cusp Of Change” for all to see.

Or at least, for all those who are willing to see. Then again, there are a few conservatives who see it, understand it is antithetical to conservative principles, but close their eyes and pull the figurative lever anyway.