The Tait for Mayor campaign posted this photo on its Facebook page this week: 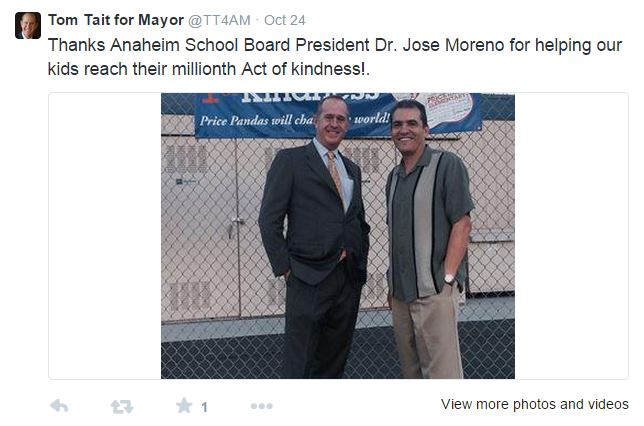 Why take a photo of Mayor Tom Tait with council candidate Jose Moreno thanking him “for his leadership” and post it on the Tait campaign Facebook page for the benefit of Tait campaign supporters – rather than on his non-campaign mayoral Facebook page? The Tait campaign doesn’t throw random photos on its Facebook page. Any savvy campaign knows this gives the impression of a support for the pictured candidate as voters are making up their minds and filling out their ballots; each FB post communicates a deliberate political message. The message here is Tom Tait is supporting Jose F. Moreno, a leftist who practices race-identity politics, for the Anaheim City Council.

The question of whether Tait is supporting Moreno’s council candidacy has been a topic of conversation in Anaheim political circles for some time, intensifying after the second member of the Tait council candidate slate, Doug Pettibone, evaporated from the race. The consensus opinion is that he is. The two men have become political allies in recent years and Moreno has endorsed Tait for re-election. Their campaigns share volunteers in common, and where one sees a Tait yard sign, it is usually accompanied by a Moreno sign. Tait wants to elect two political allies to the city council; he isn’t exerting all this money and energy to go from being a minority of one to a minority of two.

A few days ago, I spoke with a prominent leader in Orange County conservative politics who confirmed that Tait is supporting Moreno’s election, because the mayor told him as much earlier this month.

Think about that for a minute.

Tait wants to replace one of his conservative Republican colleagues with a dyed-in-the-wool leftist – which is what Jose F. Moreno is. Moreno sees the free enterprise as exploitative and thinks government’s role is applying its taxation power to society in order to redistribute wealth to whomever government elites think deserve it. He has signaled his support for hiking or establishing a raft of taxes, and wants to put the City of Anaheim into the business of subsidizing child-care.

He supports color-conscious government policies and believes the government should treat us differently according to our race and ethnicity. The racial identity politics he practices is inherently divisive. It emphasizes racial/ethnic group membership over individual citizenship, and encourages Anaheim residents to think of council members In education, Morneo is an adversary of the charter school movement, going so far as to tell the Democratic Party of Orange County that he wishes the legislature had never authorized the creation of charter schools in the first place.

Moreno’s progressive political philosophy is an explicit rejection of the natural rights philosophy that conservatives work to advance in government and politics. Primary financial support for his candidacy comes from by Bay Area left-wingers who think America is an unjust, racist country and who spend their fortunes to “build progressive political infrastructure” in California and elsewhere. Electing Jose F. Moreno and passing Measure L – the by-district council elections initiative – constitutes the vanguard of building this progressive infrastructure in Orange County.

Moreno’s announced goal is to recruit a bench of future Democratic candidates for Anaheim City Council – a sure-fire recipe for governance that is more like Los Angeles and less like…well, Anaheim. Moreno is already working to develop that bench. You can bet with confidence that the liberal candidates he is pushing for the Anaheim City School District board, appointed incumbent Al Jabbar and CTA Stat Council member Ryan Ruelas, will run for Anaheim City Council down the line.

If Moreno is elected to the Anaheim City Council – and I don’t believe that will happen — he would be the most left-wing local elected official in Orange County. One is left wondering how an outcome that would further empower militant unions and progressive political groups in Anaheim and Orange County helps the cause of limited government in one of the few conservative strongholds in the state? The sad, perplexing irony of all this is these dedicated left-wing political interests working to elect Moreno and pass Measure L are benefiting mightily from the assistance and collaboration of the Tait Family Trust, Howard Ahmanson and the OC GOP’s Local Elected Official of the Year, Tom Tait. And for what?