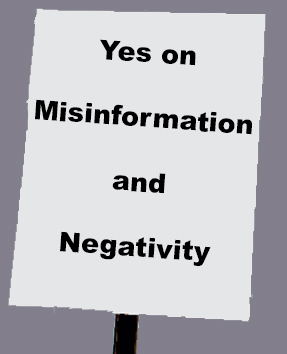 The editorial began, “Election season often brings out the ugliest in people [and in editorials]. Negative attack ads and misrepresentations have become commonplace. . . . Local politics are often the nastiest of all. . . . Some of the most deceptive campaign efforts, misinformation and negativity this election cycle are coming from two of the county’s largest and most prominent cities: Anaheim and Irvine.“ To these distinguished sources of misinformation and negativity, I nominate the addition of the Orange County Register.

The OCR’s editorial board accuses Pringle of “running a shameful smear campaign against Mayor Tom Tait,” who is applauded for opposing the “alarmingly lucrative deals lobbied for by Pringle” [and his allies]. He is criticized for supporting a tax incentive to build a new hotel in Anaheim near Disneyland and the convention center.

In fact, more hotels are needed in Anaheim to accommodate the ever-increasing number of visitors and conventioneers. To fulfill the needs of larger organizations and associations, the convention center must grow to ensure that Anaheim is selected as the convention city instead of groups choosing cities with larger convention centers and enough hotel rooms to house participants. Building hotels and adding space to a convention center is part of economic growth. If Anaheim wants tax revenues and sales taxes from future conventions, it must add convention center space and build hotels.

It has become common practice for a city to offer incentives to build large hotels and sports stadiums. Mayor Tait was the only member of the Anaheim City Council to oppose offering an incentive to build a needed hotel, an action for which the OCR praises his opposition. But it makes just as much sense to criticize Tait for trying to deprive Anaheim from hosting future major conventions and forfeiting future tax revenues. No hotel = no hotel taxes. No conventions = no participants = no sales for Anaheim businesses = no sales taxes.

The Editorial Board noted, “In his first State of the City address, Tait publicly discussed the unfunded pension liabilities facing the city, announcing he intended to conceive a plan to deal with the issue.” It is said that the road to hell is paved with good intentions. After 4 years, Tait has not yet presented a plan to the Anaheim City Council to solve the problem of unfunded pension liabilities.

Finally, Tait is praised by the OCR for his public comments regarding the city’s negotiations with the Angels. Does Tait want the Angels to remain in Anaheim? If yes, he must recognize that baseball is a business, and the Angels will profit, or they will move to Walla Walla. In fashioning a new agreement, negotiations must remain private—or the Angels will strike a deal elsewhere. By their very nature, negotiations are private. “Stated more precisely, it is our system of contract law that underpins and makes possible the many private [emphasis added], voluntary agreements by which exchanges of goods and services are accomplished in our society” (Markham, 2002). Members of the OCR editorial board know the importance of private negotiations: When Freedom Communications sold the OCR—“terms of the deal were not disclosed” (Milbourn, 2012).

It seems ironic that the OCR accuses others so sanctimoniously of spreading misinformation and negativity.