Anaheim voters received a “Yes on L and M” mailer on Friday with a photograph Anaheim gadfly Cynthia Ward and her husband on the front along with the words “We Love Anaheim. That’s why we’re supporting Measures L & M.”

Ms. Ward’s loves Anaheim so much that she has filed expensive lawsuits against it twice in the last year: for example, to stop the much-needed expansion of the Anaheim Convention Center. 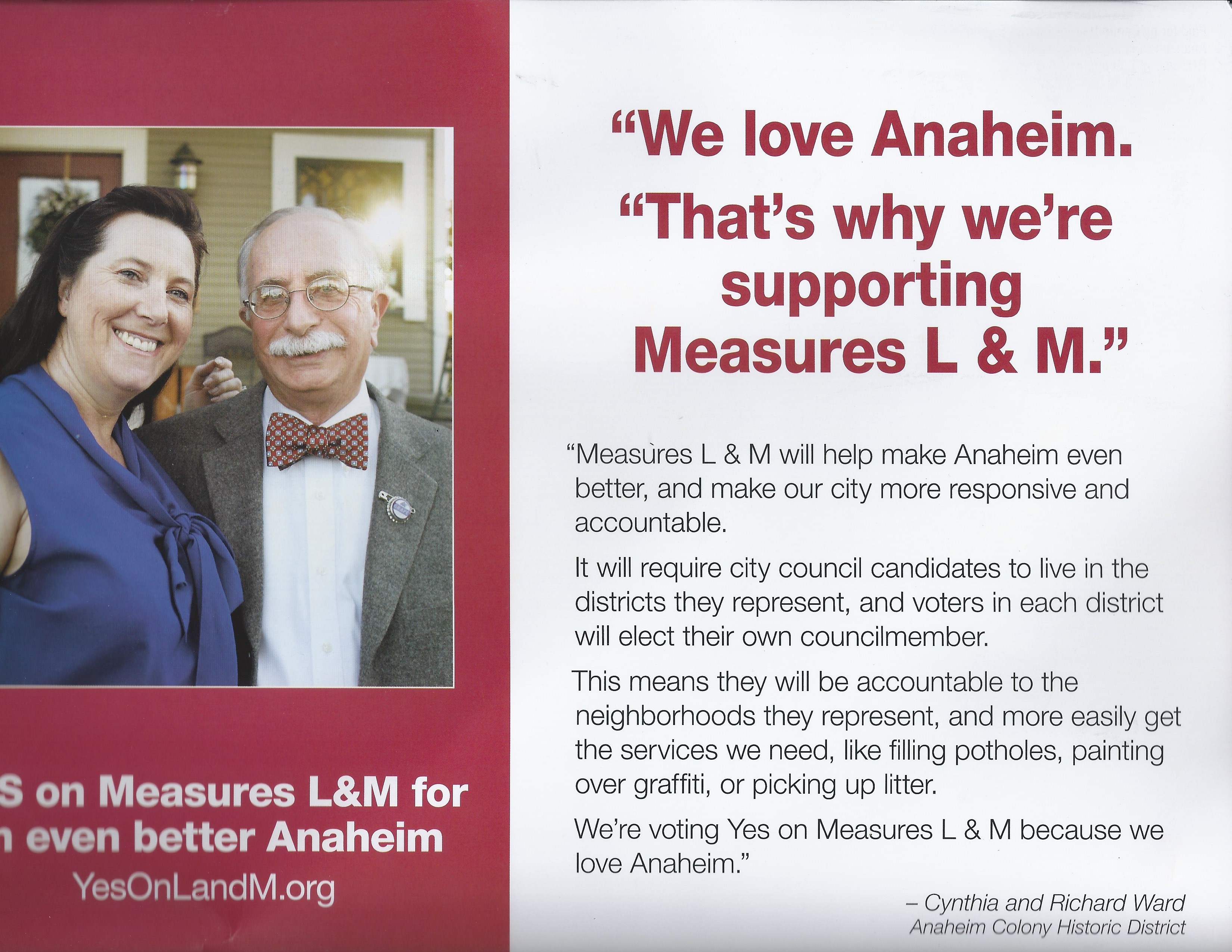 Leaving aside this strange demonstration of affection, Ward’s stance on by-district council elections is exactly the opposite of what she told the OC Register in 2012:

Cynthia Ward, 46 and a lifelong resident of Anaheim, is not one of [those supporting by-district elections].

“Do we want to create a lot of special-interest districts and become like Los Angeles or Chicago?” she asked. “You’re going to have people saying, ‘Hey, you got a substation, I want a park for my area.’ “

“Districts will create pork,” she added. “Just like Washington, but on a smaller scale.”

Ward was actually correct in 2012. Since Ward executive this stark, dramatic flip-flop in 2013, it took her less than a year to do a 180-degree turn on by-district elections – going from believing they will be horrible for Anaheim to saying the way to show one’s love for Anaheim is to support by-district elections. It doubtless makes it easier for her to be a fervent acolyte and apologist for everything Mayor Tait says and does. Otherwise, it would be difficult to tell voters he is the greatest force for good in Anaheim while simultaneously saying he’s trying to turn Anaheim into special-interest porkfest like Los Angeles.

This mailer was sent by the “Yes on L” campaign, which is entirely funded by unions and left-wing political interests committed to “building progressive political infrastructure” in California. These out-of-town special interests love Anaheim so much they want to re-structure its council elections and turn it into a Democratic bastion. This makes Ward’s lending herself to this cause especially ironic, since Ward is the executive vice president of the Anaheim Republican Assembly and continually inveighs (along with Measure L’s GOP front man, Mayor Tait) against the influence of outside special interests on Anaheim government and politics. Then again, consistency and constancy have never been her strong suits.