The OC Registrar of Voters counted 14,765 additional ballots today and updated the vote total at 5:00 p.m.: 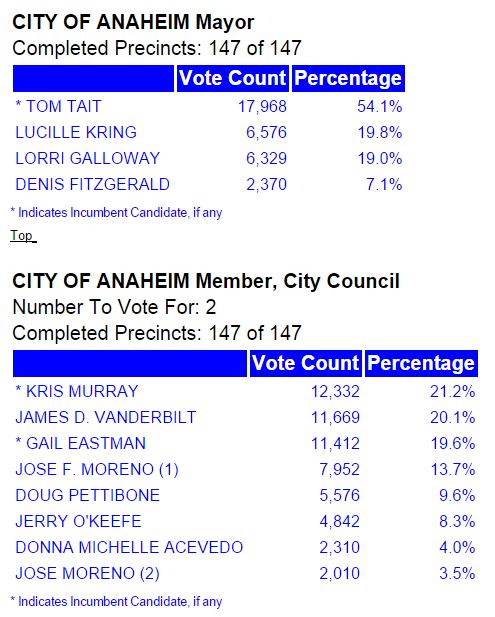 Tom Tait and Kris Murray remain locks for re-election, and Tait Slate candidate James Vanderbilt still appears headed toward being sworn in as an Anaheim City Council member in a month. Councilwoman Gail Eastman picked up 40 votes and narrowed Vanderbilt’s lead from 297 to 257 votes. 14,765 ballots were counted today, and the combined mayoral vote increased by 420 – meaning 2.8% of those were from Anaheim. A number of those voters either bullet voted for council or left that part blank, since the combined council vote total increased by 748. ,

There are still 135,540 uncounted ballots remaining countywide. We have no way of knowing what cities those are from – although I’ve heard insider speculation they’re disproportionately from the SD34 and AD65 – but let’s suppose for the sake of discussion that the 2.8 percentage holds and 3,795 of the remaining uncounted ballots are from Anaheim. It’s still very unlikely Eastman will be able make up the 257 vote deficit.

This was reflected in the council votes. Kris Murray finished second in 2010 with 17,81 votes, and was the top vote-getter this year with 12,332 votes. Not as dramatic a drop as in the mayoral race, but still significant.

The vote totals the ballot measure tracked the mayoral totals; 32,889 cast in the Measure L contest. Think about that: Anaheim has 345,000 residents and 126,024 registered voters – and 6.5% of the city’s population (22,455) just decided the size of and method for electing the city council that will govern the other 93.5%. When turnout is that low, it’s more like a polling sample than an election.

A lot of the turnout difference can probably be attributed to the lack of competitive races at the top of the ballot, as opposed to 2010 when Meg Whitman and Jerry Brown were squaring off.