Moreno’s Defeat Is A Tactical Loss, Measure L Is A Strategic Win for Anaheim’s Political Left

Leftist council candidate Jose F. Moreno finished a distant fourth place last week, despite the generous financial assistance of rich San Francisco Bay Area progressives. The newly-minted Democrat and Tom Tait ally declined to seek re-election to the Anaheim City School District Board off Education to make a run for the Anaheim City Council, and was the the de facto second member of the Tait Slate following Doug Pettibone’s lightning implosion. There was some speculation Moreno might make it by virtue of being the sole Democrat on the ballot with a credible campaign, combined with the $100,000 Tait Family/Ahmanson IE against Kris Murray and Gail Eastman. Moreno’s campaigned on more-or-less the same campaign themes as Tait and James Vanderbilt, but he was a left-wing proponent of color-conscious politics running in a Republican year when Anaheim’s voting electorate leaned Republican.

While Moreno’s defeat was a tactical defeat for the Left in Anaheim, passage of Measure L was a strategic victory and the most consequential result of last week’s election – not just for Anaheim, but for Orange County. The Yes on L and M campaign’s mail and ground game, funded by more than $350,000 from outside union and progressive political interests – and with support from the Tait Family Trust and Howard Ahmanson IE campaign — won a campaign based on promises of responsive government, better streets, trimmed tree and pledges of a better, brighter future for all God’s children. It reminded me of Measure W – the campaign that promised Orange Countians a huge, fabulous, world-class Orange County Great Park at no cost to taxpayers. The promises of the Measure L campaign carry the same value.

Measure L won by 37 points, but its companion initiative, Measure M, only passed by 8 points – even though the official “Yes” campaign urged voters to approve both measures. 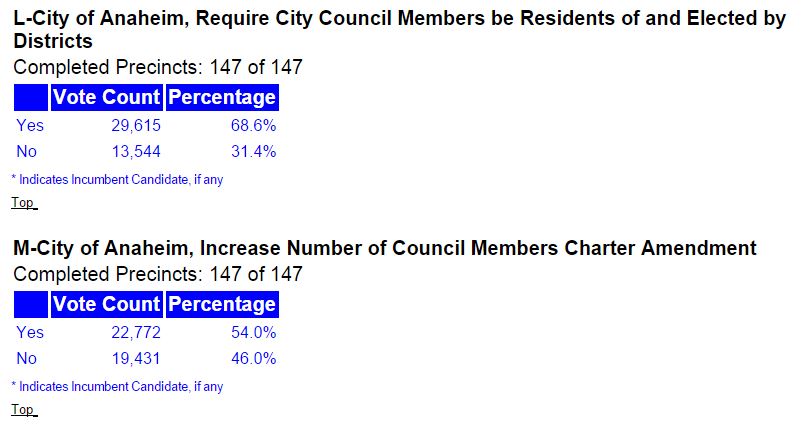 While the ostensible rationale for by-district elections argues for a larger council – the “neighbors electing neighbors” platitude is less divorced from reality with a six-member council – several thousand voters likely viewed the prospect of more councilmembers with less relish than the promise of having councilmembers from the various areas of Anaheim. That probably accounts for most of the disparity, although I’d wager a significant percentage of voters who supported Measure L believed they were voting for a from-district system in which council candidates would still run at-large.

With the exception of the back page of late independent expenditure — compared to around a dozen from the pro-L side – there was no anti-L campaign in terms of direct voter communication. The OC Register conveniently held its “No on L” editorial until the day before the election – and even then left that recommendation off its clip-n-save Voter Guide. The Register editorial pages managed to publish a position on Measure N (the utility rate transfer) nearly a month earlier, but held its endorsement against the most consequential local ballot measure in Orange County this election season until it would make little if any difference.

When one side of a ballot question outspends another by a factor of nearly 30-to-1,  a lopsided outcome isn’t very surprising. Even so, it’s obvious a majority of Anaheim voters felt it was time for a change. It will be interesting to see a precinct-by-precinct breakdown of the Measure L and M vote, but I would venture to guess the “Yes” vote was strongest in the flatlands.

This is a big win for California unions and progressives, and they owe a huge debt to Mayor Tom Tait for helping to advance their political fortunes in Anaheim. Tait’s all-out effort to defeat his council colleagues tied them down and effectively prevented Gail Eastman and Kris Murray from putting any effort into a No on L campaign. The mayor’s office carries prestige and sway with Anaheim voters, and Tait placed it weight squarely behind this left-wing coalition’s campaign to build “progressive infrastructure” in Anaheim.  His support effectively paralyzed Orange County Republican leaders, who knew Measure L was bad for the Republican Party but were – with the exception of the Lincoln Club – unable and unwilling to anything about it. In my experience, unions and progressive groups not only have a better understanding of their interests than OC Republicans, but are much more willing to act on that knowledge.

There are some truly ironic aspects to the Measure L campaign. As noted, there was the spectacle of the Republican Party of Orange County’s Local Elected Official of the Year proclaiming “so what if our party loses a few seats” and working hard to obtain voter approval of a Democratic Party of Orange County-endorsed ballot measure cited by the Orange County Labor Federation as one of its top political priorities in 2014.

We saw the Tait Family Trust and conservative heir Howard Ahmanson spending money to promote an initiative designed to elect councilmembers who will push public policies of the kind that both have been spent decades opposing.

But what’s done is done. Anaheim’s political terrain has changed, and Anaheim’s various political actors and interests will have to adapt to it; but it’s a pretty safe bet Measure L will deliver little of what by-district proponents have been promising Anaheim voters.