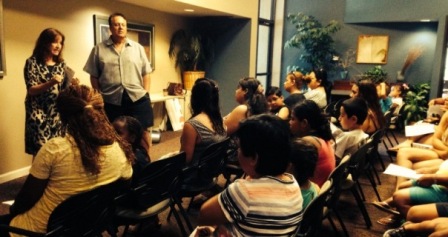 This came over the transom yesterday :

Anaheim parents are currently organizing to convert their elementary school, Palm Lane, into an independent public charter school. Palm Lane has been a state-identified underperforming school for ten years and is the lowest performing school in the Anaheim City School District. District Trustee Jose F. Moreno has consistently blocked the efforts of the parents right to use the Parent Empowerment Act (“Parent Trigger”) law to transform the school, resulting in his defeat for election to the Anaheim City Council in last week’s elections. His loss, in particular, has underscored the growing powerful voting bloc of parents seeking greater school choice options and educational quality for their children.

Gwen Samuel founded the CT Parent Union and worked to pass a version of California’s Parent Trigger law in her state. She has authored the book, “Game On, Parents!” as a guidebook for parents organizing to bring change to chronically underperforming schools.

Senator Romero (Ret) is the Founder and Strategic Planner of the California Center for Parent Empowerment which is dedicated to teaching parents about the Parent Empowerment Act which provides unique, historic parental choice options in public education. She authored the groundbreaking law in 2010.

Doreen Diaz was a lead organizer in Adelanto Desert Trails School movement and successfully led the drive to become the first parents to convert their underperforming school into a charter school under the law.

Parent leaders from the Anaheim area will join them in a discussion of ideas, strategies and building the Parent Rights movement nationally.

ACSD leadership has been very hostile to charter schools. Soon-t0-be-former ACSD Board of Education member Jose F. Moreno told OC Democratic Party members he wished the state had never authorized them at all. Newly re-elected board member Jeff Cole is virulently opposed to charter schools. ACSD Board member-elect Ryan Ruelas is a teacher union activist who represents the Anaheim Secondary Teachers Association on the CTA State Council; since killing charter schools (and defending teacher tenure) are the top priorities of the state’s teachers unions, it’s hard to see Ruelas lending a sympathetic ear to Palm Lane parents trying to convert their school to charter status.

This is going to be a major fight in the Anaheim City School District. We will witness a vivid illustration that teachers unions are first and foremost about protecting their members, and not fighting to ensure that children receive a quality education or respecting parents’ natural right as the primary educators of their own children.