Elevating substandard school performance is not easy. Ironically, factors that least affect student achievement (e.g., tests, technology, money spent) are the factors most often debated. Hundreds of millions of dollars were spent to implement the No Child Left Behind Act of 2001, yet neither scores in reading nor mathematics improved significantly. Long-term improvement in student performance has never resulted from spending more money, as I previously pointed out (Glenn, 2014).

Researcher John Hattie at the University of Auckland, New Zealand, has focused his academic research to identify factors that matter as far as student achievement is concerned (and factors that don’t matter). Regardless of the structure of schools or classes, almost without exception, the presence or use of any factor is positively related to school progress. In other words, if students have a pulse, they learn—regardless of school type, teaching methods, online or on-campus instruction, and scores of other factors.

Analyzing data collected from 250,000 students, Hattie (2009) used effect size* to measure the influence of almost 200 factors, calculating more than 800 meta-analyses. When including all factors, he found an average (mean) effect size of 0.4. Overall, students improved academically regardless of the activity, condition, or instruction; whether they attended small classes, multigrade classes, or single-gender classes; whether grouped based upon age or ability; whether schools used a year-round schedule or the traditional two-semester schedule—or whether attending a public, private, or charter school. Two factors were found that negatively affected student achievement: retention (–0.16) and student mobility (–0.34). In other words, the majority of students who repeated a grade fell further behind as did students whose families moved excessively. 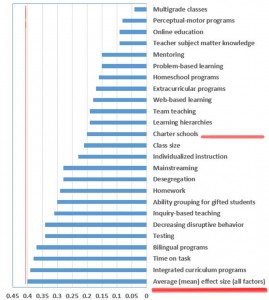 If these factors do not influence student performance, which factors do? Hattie’s principal finding: More than any other factor, teachers matter. Teacher feedback (.73) and teacher-student relationships (.72), for example, are examples of large effect sizes, factors that significantly influence student achievement.

Hattie (2009) stated: “When students were asked about their best teachers, the common attributes were teachers who built relationships with students, teachers who helped students to have different and better strategies or processes to learn the subject, and teachers who demonstrated a willingness to explain material and help students with their work” (p. 108). It is worth noting that researchers have found that students do not associate their best teachers with factors such as requiring students to meet standards, complete homework assignments, pass skills tests, record satisfactory annual yearly progress, or value high course grades.

For an explanation of effect size, see http://tinyurl.com/lw96t6j.