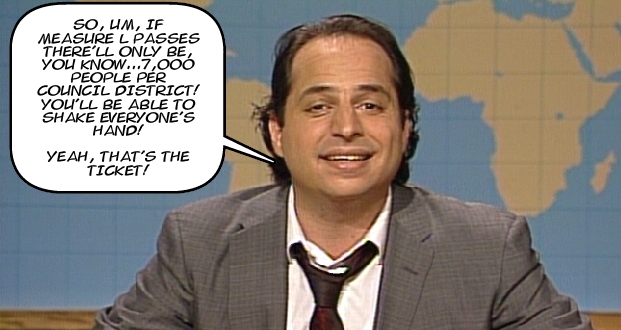 As I’ve noted in a previous post about the ballot victory of Measure L – which replaces the current at-large system for electing the Anaheim City Council with a by-district system – it’s my belief that a goodly percentage of those who cast “yes” votes think they’ll still be able to vote on all council candidates. The underlying theme of the Yes on L campaign was Anaheim voters was that it would guarantee that someone from their part of town would be on the city council (which would be the case if L had lost), not that voters would be giving up the right to vote on all council candidates and only be able to vote on candidates in their district. I could be wrong.

I was surprised at the lack of understanding displayed by an ardent Measure L volunteer quoted in this Los Angeles Times article:

“All this time, to not have anyone on the council representing us is a shock — and unacceptable,” said Ada Tamayo, who lives near Pearson Park, not far from the site of a 2012 police shooting that fueled days of protest.

Tamayo is mulling the idea of entering politics herself.

“I’ve volunteered for two years for this campaign, and to have this victory is a thrill,” she said. “People are intimidated running for office, especially in a place like Anaheim where you have 300,000-plus residents and must raise a lot of money to reach everyone.

“With districts, with some 7,000 people, candidates can actually walk door to door and shake hands with everyone. Voters will be able to know who they are electing.”

Candidates will not be able to “walk door to door and shake hands with everyone.” In terms of population, each council district will be the equivalent of a mid-size Orange County city like Fountain Valley  – where they still have to raise money and send out campaign mail.

It’s surprising that none of the professionals who’ve been shepherding the by-district elections campaign for the last two years ever corrected Ms. Tamayo’s misapprehensions. Furthermore, when such a dedicated Measure L volunteer exhibits such misunderstanding of how by-district council elections will work, one has to wonder many “yes on L” voters actually thought they were casting their ballots for.