The OC Registrar of Voters has finished counting the votes and published the unofficial final results online. In Anaheim, this confirmed what has been apparent for several days: Mayor Tom Tait and Mayor Pro Tem Kris Murray have each been re-elected to a second term, while Anaheim City School District Board of Education member James Vanderbilt has edged out Councilwoman Gail Eastman. 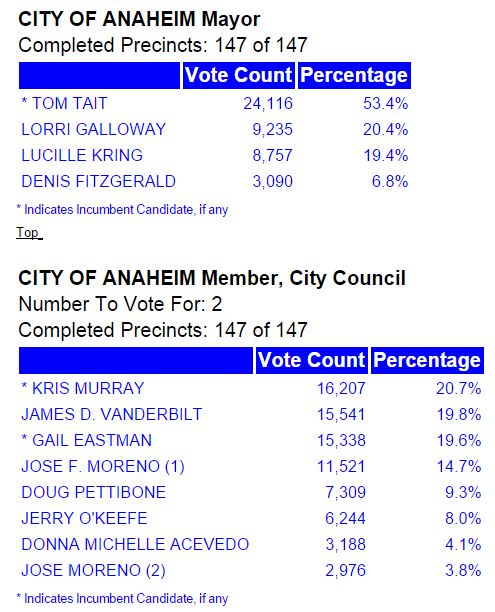 Mayor Tait finished 53.4% of the vote, down slightly from the 54.4% her garnered in 2010. Mayor Pro Tem Murray significantly increased her percentage from 16.6% in 2010 to 20.7% this year – an achievement considering how she (and Councilwoman Eastman) were savaged by a $100,000 negative campaign funded by the Tait Family Trust and Home Savings of America heir Howard Ahmanson through the California Homeowners Association(CHA) campaign committee. Councilwoman Eastman received 19.6% versus 19% in 2010, but not enough to stave off Vanderbilt. When the margin is only 203 votes — about 1.3 votes per precinct — defeat can be ascribed to any and all factors. However, it was the CHA falsely accusing Eastman of falsely claiming the OC GOP endorsement that most likely did her in.

The farewell and swearing-in ceremony will take place at the December 9 meeting of the Anaheim City Council.