Posted by: Matthew Cunningham in Business and Tourism November 21, 2014 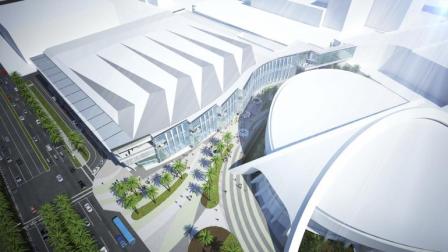 Notwithstanding the efforts of out-of-town trial lawyers, local gadflies and naysayers, the Anaheim Convention Center expansion approved by the Anaheim City Council earlier this year is moving forward. The lawsuit by CATER/Inland Oversight Committee/Cory Briggs was crushed in court by the city several weeks ago, the bonds financing the expansion were sold last week, and the expectation is ground will be broken and construction commenced early next year.

The City of Anaheim issued this press release this afternoon

ANAHEIM, Calif. (November 21, 2014)  The Anaheim Convention Center, LEED certified and the largest exhibition center on the west coast, will soon begin its seventh expansion project, furthering the Center’s standing as the preferred location for world-class meetings, events and conventions.

It is conservatively estimated that the City’s General Fund would be better off by $115 million over the next decade and $320 million over a 30-year period by expanding, as determined by an outside consultant (Crossroads Consulting Services).

Each year the City generates millions of dollars due to the large annual events booked at the Anaheim Convention Center. Attendance over the past five years has averaged nearly 1.1 million guests at Convention Center events alone. This translates to hotel room stays, dining, shopping and entertainment for those guests, many of whom use the opportunity to plan a family vacation or extend their stay to enjoy Anaheim and Orange County’s many amenities.

The original bond financing, approved by City Council in March, 2014, allowed for not only the Anaheim Convention Center expansion, but also refund debt at a lower interest rate and finance other community improvements.  However in May, 2014, the City was met with a lawsuit from local organization CATER (Coalition of Anaheim Taxpayers for Economic Responsibility). The lawsuit caused the cancellation of the bond sale, delayed the project, and caused the City to be liable for increased construction fees as well as legal expenses.

Following the Orange County Superior Court review of the case, the City received resounding victory by the Court’s validation of the approved financing.

This is good news for Anaheim, which decades ago decided to chart a course as major convention/tourism destination. Anaheim has succeeded by remaining committed to that vision and regularly taking steps to remain a competitive as a top-tier destination. This seventh ACC expansion is a continuation of that effort, as is standing city policy to encourage the development of luxury hotels via economic assistance agreements. We saw plenty of criticism of this Convention Center expansion from certain quarters, but not alternative solutions.

This ACC expansion episode and others that have dogged Anaheim’s civic atmosphere of late brings brings to mind this passage from Peggy Noonan’s latest column, in which she contrasts the messianic nihilism of the Obama Administration with the Reagan and Truman presidencies:

Historical vindication happens. The Obama White House assumes it will happen to them. Thus they can do pretty much what they want.

What they forget is that facts largely decide what history thinks—outcomes, what happened, what it means. What they also forget, or perhaps never knew, is that the great ones are always constructive. They don’t divide and tear down. They build, gather in, create, bend, meld, and in so doing move things forward.

That’s not this crowd.

This White House seems driven—does it understand this?—by a kind of political nihilism. They agitate, aggravate, fray and separate.

Here’s to hoping there’ll be less agitation, fraying and separating going forward, less my-way-or-the-highway, and more focus on common ground. To paraphrase Ronald Reagan, the person who agrees with you 80% of the time should be seen as a friend, and not a 20% enemy.