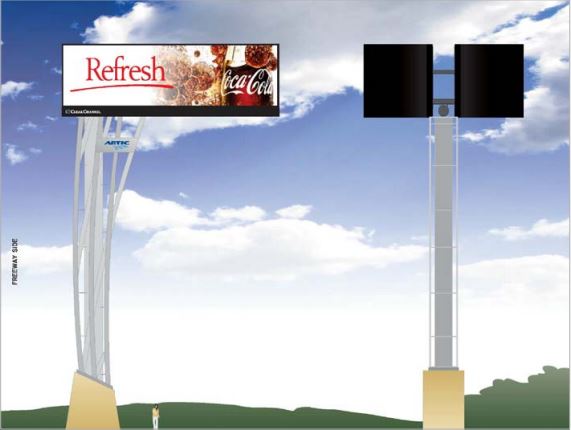 A party or parties unknown paid for a robocall to Anaheim residents this weekend, asking them to call or e-mail Anaheim City Council members in opposition to Item 20, which calls on the city council to approve an agreement with Clear Channel Outdoor (CCO) to build and operate a freeway-visible electronic billboard adjacent to ARTIC.  The robocall has spurred a flurry of communications to councilmembers in opposition tot the proposal.

Although the city has prohibited the erection of outdoor billboards since 2006, City of Anaheim-sponsored legislation carried by Sen. Lou Correa created an exception for cities with high speed rail stations to allow outdoor display advertising by those stations. The intent of this agreement with CCO is to generate revenue to cover a portion of ARTIC’s operating costs. From the staff report:

The proposed Indoor/Outdoor Advertising and Licensing Agreement will put this unique legislation into practice and contract with CCO to manage and implement the process for generating revenue through the marketing, sales, operation, maintenance, and construction of advertising spaces within the ARTIC site. Revenues from the advertising will be specifically used for the operation and maintenance of the ARTIC facility, as required by the legislation.

In addition to constructing the structures, Clear Channel has agreed to provide the City with rotations on the digital signage at Katella and Douglass for no cost. This will allow Public Service Announcements and additional tenant recognition as the City partners with its leasees within the ARTIC property and will help to market the facility, bringing additional patrons to the site.

CCO provided the most comprehensive work-plan and revenue share proposal for the City. CCO will pay to the City an annual license fee in an amount equal to the greater of 55% of Gross Advertising Revenue from the advertising or the applicable Minimum Annual Guarantee (MAG) on a quarterly basis. Estimated revenue for the remainder of year one is $327,000 increasing to $890,000 in year two and $1.7 million in year 20 with the MAG starting at $325,000 going up to $496,000 over the same time period.

This agreement makes sense. It’s not as though the city would be approving billboards in areas of the city where none exist today. The agreement permits building an 84-foot electronic billboard next to the 180-foot tall, nocturnally illuminated ARTIC station, which itself is directly across Katella Avenue from the Honda Center and its electronic billboard. On the other side of the 57 Freeway is Angel Stadium and the 230-foot tall, illuminated Big A sign.  It fits perfectly within that district of the city.

Opponents voices fears this will create a “slippery slope” and lead to the approval of more billboards in Anaheim. I believe these fears are unfounded. The special legislation authorizing the city council to approve this agreement is specific to ARTIC and doesn’t grant the city back-door authority to effectively repeal the general billboard ban.

The City Council should approve the agreement.

The Voice of OC has a story on the topic here.