Throughout most of the United States, the term racial profiling is a misnomer because for many years this term has included race, ethnicity, religion, and national origin. The most visible exception is probably the stop-and-frisk practice of the New York City Police Department. During January through September 2014, New York police officers initiated 38,456 stops and interrogations of which 4,590 were White (12%) and 20,683 (54%) were Black. The vast majority of stops, 31,661 (18%) resulted in no further action. Overall, evidence remains mixed regarding whether stop-and-frisk directly decreases the number or severity of criminal acts.

The Border Patrol and the Transportation Safety Administration (e.g., airport security) may ignore visual cues as sources of suspicion. In the case of the Border Patrol, however, its officers may ignore visual cues when a suspect is fewer than 100 miles from the border. Considering ethnicity is permitted when investigating illegal immigration. Otherwise, profiling shall not include any of the aforementioned factors. No federal profiling guideline applies to local police. Except for the exceptions. 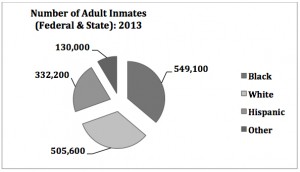 Racial profiling has been discussed many times by Attorney General Eric Holder, who regards this practice as a violation of civil rights. In the case of race, however, there is a valid reason why Blacks have been disproportionately subjected to stops and interrogations: the federal and state U.S. prison population is not proportionately representative of the general population. Specifically, the total number of males and females and the corresponding percentage of inmates are disproportionate to the nation’s population for race, ethnicity, and gender; for example, (a) 93% of the inmate population is male (Bureau of Prisons, 2014a), and (b) 40% of inmates are Black, although Blacks constitute only 13% of the nation’s population (Bureau of Prisons, 2014b; also see figure).

Trying to please all profiling stakeholders results in gratifying some groups and displeasing others. In this case, inconsistent profiling rules result when trying to appease widely diverse organizations such as the ACLU, the Border Patrol, the Justice Department, Muslim Advocates, the National Action Network, the Transportation Safety Administration, the White House, and local police departments.

To the White House, but not to Attorney General Holder, it is impossible to avoid entirely the discriminatory use of ex ante (beforehand) factors for criminal suspicion such as ethnicity, race, religion, and national origin. Thus, in the eyes of federal profiling guidelines, if a female and a male emerge from a bank just robbed, there is no basis to assume that the male is more likely the robber, even though 93% of the federal and state U.S. prison population is male. It is forbidden to assume that members of a particular race are more likely to sell drugs, and it is assumed that females are just as likely as males to sell them.

In today’s ubiquitous environment of potential terrorism, profiling is needed and sensible in some cases, as Israel has convincingly demonstrated. Since the Lod Airport Massacre in 1972 that killed 24 persons and injured 80, no attack on Israeli airlines has succeeded. Here, political correctness requires that we continue to ignore the reality that it makes more sense to profile (with exceptions) than it does to ban it (with exceptions).