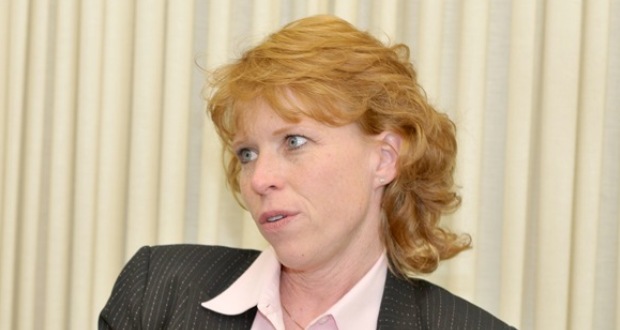 Government bureaucracies tend to resist change and defend the status quo, and none more vigorously than public education bureaucracies. In the Anaheim City School District, a group of parents is utilizing the state Parent Trigger Law in an effort to convert Palm Lane Elementary School to charter status – and the school district is fighting them.

Earlier this month, ACSD Superintendent Linda Wagner, acting in her official capacity, sent a letter and recorded a robocall to parents making false claims about the Palm Lane School signature gathering effort. Wagner’s letter is inflammatory and contains untruths, half-truths, and exaggerations. It presumed intent and effect is to actively (if tacitly) discourage parents from signing the petition by using the district’s institutional prestige to cast doubt on the motives and ethics of the parents group.

“Recently, it has been reported to us that there are people in the community who have been paid by an organization to gather signatures for a petition that could completely change the way some of our schools are run. We have been told that these people are promising free iPads and tutoring for students in exchange for a signature on their petition. What they may not be telling you is that signing the petition could change our schools in dramatic ways.” [emphases added.]

Note the repeat use of the caveat “we have been told.” Wagner is relying on hearsay about to make parents suspicious of the Palm Lane parents group. This group has a name – Parents of Palm Lane Elementary United (PPLEU) – which Ms. Wagner never uses in her letter.

Wagner falsely claims the petition “could completely change the way some of our schools are run” and “could change our schools in dramatic ways” when in fact it pertains only to one school: Palm Lane Elementary.

“If they wish to do so, the law allows parents to sign petitions that cause one of several things to happen. The petition could cause your child’s school to become a charter school; it could force the closure of Palm Lane Elementary; and it could result in a complete change in the faculty and staff of the school.”

Classic public education establishment scare tactic: “if these reformers succeed, your school will close and the teachers you like will be fired.” Unions and administrators push this line on school employees, who in turn tell parents they’ll lose their jobs if a charter school is established.

Furthermore, Wagner claims signing the petition could lead to closure of Palm Lane Elementary or even lead to firing the Palm Lane staff – gross misrepresentations.  Rather, the petition explicitly states the goal is “to transform PALM LANE ELEMENTARY SCHOOL in the ANAHEIM CITY SCHOOL DISTRICT into an independent charter school using the RESTART MODEL as described in CA Code of Regulations (CCR), Title 5, section 4804.”

It could be Wagner knows this and chose to needlessly alarm parents, or she didn’t know the petition specifies the re-start model and misled parents about a petition she hasn’t read. Neither explanation reflects well. 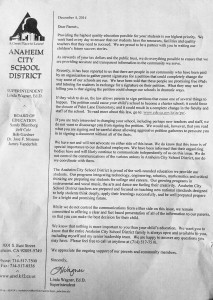 Despite claiming the ACSD “will not advocate on either side of this issue,” Superintendent Wagner is unmistakably positioning the district in opposition to the charter school petition. Notwithstanding some tactically inserted camouflage language, a reasonable person can see Wagner’s letter is intended to discourage parents from signing the petition.

Wagner Letter & Robocall Cames As D.A. Asked ACSD To Address Petitoners’ Complaints
According to a December 5 article in the OC Register, PPLEW and its allies had already voiced complaints about intimidation tactics by the district and unions. They went to the OC District Attorney’s office, which sent a letter to the ACSD asking for those complaints to be reviewed and asked to be notified of improper conduct by either side of the charter question.

Then ACSD Board President Jose F. Moreno dismissed those complaints as “fabrications.” Wagner denied any wrongdoing in the December 5 OCR story. Her letter to parents about the Palm Lane Elementary charter petition is dated December 4. Since Wagner “had been told” of the alleged offers of free iPads, did she comply with the request from the District Attorney’s Office and let them know?  Palm Lane charter proponents – who vehemently deny the allegations in Wagner’s letter to parents – have heard nothing from the DA’s office.

Palm Lane Charter Proponents on Allegations in Wagner Letter: “Complete and Total Lie”
I reached out to some of those involved in the Palm Lane Elementary charter school drive and asked about the allegations in Wagner’s letter, especially claims of offering free iPads and tutoring as inducements to sign.

“A complete and total lie,” said former state Sen. Gloria Romero. She noted that the district had already been contacted by the DA and Wagner had ample opportunity to present her claims of petition signature gatherers bribing parents.

“She can’t just yell ‘fire’ and then walk away.”

Another charter petition drive leader made the same point, saying Wagner and the district “ignored the direct and clear instructions from the DA’s letter to them to report any wrongdoing on either side. Instead, she just made false allegations to intimidate parents from signing petitions.”

Where’s Wagner’s Warning About Union Politicking on Palm Lane Charter Petition
ACSD unions haven’t been idle while Palm Lane Elementary parents work to re-start their school as a charter school, as Superintendent Wagner states in her letter, telling parents that the charter petition “is of special importance to our dedicated employees. We have been informed that their organizing bodies have and will likely continue to communicate independently of us on this issue.”

On one hand, Wagner thinks it necessary to use school district resources to communicate with parents about the Palm Lane Elementary charter petition, on the basis of unattributed hearsay, in a manner prejudicial against signature gatherers. Are we to believe the ACSD union have engaged in strictly fact-based communications with parents that Wagner feels no need to correct? Given the misleading, unfactual nature of her letter, one has to question the district’s capacity to even make such a judgment.

What Parents of Palm Lane Elementary United is Seeking
In a letter to parents, PPLEU explain what they want:

School administrators and elected board members have had tools to turnaround chronically failing schools. Yet, they have failed to do so. Our children can no longer wait -­‐- 10 years of waiting for “Program improvement” status is simply unacceptable. Parents of Palm Lane Elementary United demand a new vision and immediate change for our school that includes:

Wagner Acting Alone or At Behest Of ACSD Board Members?
It’s reasonable to ask if Superintendent Wagner is acting on her own, or at the behest of Board of Education members. The letter and robocall were distributed prior to the departure of Jose F. Moreno, who has stated explicitly that he opposes charter schools in principle and wishes the state had never authorized them in the first place. ACSD Board member Jeff Cole is also extremely hostile to charter schools. I’ve been provided with e-mails sent by Cole in which he expresses his contempt for charter schools:

“ACSD continues to be threatened by charters. I am the only board member that stood up for teachers and kids. I repeatedly voted no on all charter votes. Let’s win in November and protect our district.”

“I am worried about continous(sic) charter attacks. This scam is just getting started in Anaheim.”

If and when they are successful in garnering enough signatures, the ACSD Board of Education will vote on the Palm Lane charter application. Given these statements, and the superintendents interference in the petition process, does anyone think these parents will receive a remotely fair hearing for their charter application?

At the very least, Superintendent Wagner and the ACSD owe an apology to parents for giving them false and misleading information about the Palm Lane Elementary charter petition, and to PPLEW for abusing taxpayer resources to undermining these parents exercise of their legal rights under the Parent Trigger Law.

Superintendent Wagner also owes the public an explanation of who “reported” the free iPad accusations and whether of not she received any communication from board members or union leaders urging her to send out the letter and robocall.