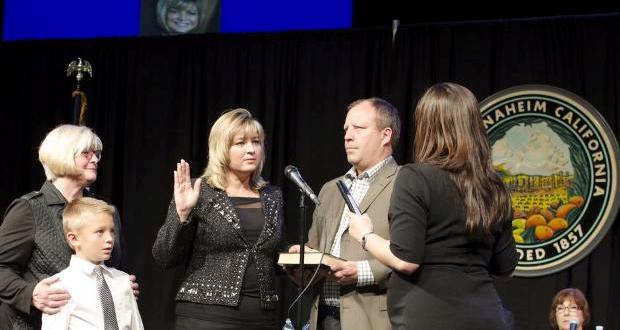 After taking the oath of office for a second term on December 9, Mayor Pro Tem Kris Murray called for increasing protections for Anaheim taxpayers by amending the City Charter require a two-thirds super-majority vote in order for the city council to place a tax increase before the voters.  Murray cited growing efforts statewide to weaken Proposition 13, as well as the example of neighboring Stanton voting to hike its sales tax last month, as requiring additional institutional protections for taxpayers. Murray told the audience:

As city leaders, we have only three ways to increase city funding. We can impose a tax, we can impose a fee, or we can generate new revenue through private investment. In the past election, we saw cities statewide and even here in Orange County place sales tax increases on their ballots to pay for basic city services because those cities options for private investment were so limited.

There is a continued push at the state level for tax measures that would roll back Proposition 13 protections and generate revenue from a wide array of fees and other specified tax increases. Even during this last election in Anaheim we heard discussions about new utility taxes, sales taxes, gate taxes and myriad fees. Many cities have no choice but to impose these measures. But I believe they disproportionately burden lower-income residents. Instead, I’ve been a strong advocate of working with the business community to generate private investment so that the revenue for city improvements doesn’t come from the pockets of our taxpayers; so that we don’t look to regressive forms of revenue to fund city services.

Therefore I will work with my colleagues and staff to explore protections for city taxpayers that include proposing a charter amendment requiring a two-thirds of the city council to place any local tax measures on the ballot. This is already required of general law cities but not of all charter cities and I want to ensure that Anaheim has the same level of taxpayer protections in place.

Here is the video:

Murray will seek to have this charter amendment placed before the voters in 2016. Earlier this year, Murray authored a city council resolution stating Anaheim’s support for Proposition 13 and opposing any attempts to weaken or dismantle California’s landmark taxpayer protection law.