“Political Correctness” is the PC Word for “Censorship” 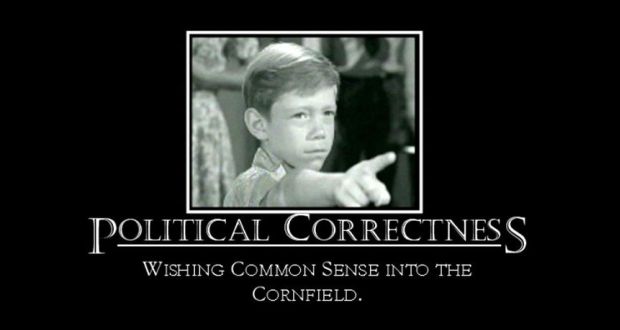 “Quite frankly, I think political correctness is the worst form of censorship. You’re not allowed to speak your mind unless you’re black, or unless you’re a terrorist, or unless you’re an Arab or a minority people. Then you can say what you like. But if you are like a lot of us you are not supposed to say certain things.”

Some examples:
• Four male students at Adolfo Camarillo High School were suspended for shouting “USA, USA” at a basketball game. Why? The principal was afraid the chants might be racially motivated because a large number of students were Hispanic, and the chant might offend them.
• A student at a Seattle elementary school filled plastic Easter eggs with jellybeans as a community service project. Her project was OKed as long as she called the eggs “spring spheres.”
• A Florida cop referred to Trayvon Martin as a thug on Facebook. He was fired.
• A high school track team was disqualified because a runner made a gesture thanking God when he crossed the finish line.
• In certain places Santa can no longer chant “Ho Ho Ho” because it might be offensive to women; “ho” is a slang word for whore.

Political Correctness restricts free speech
How can we discuss the real problems facing America if we’re terrified a slip of the tongue or a wrong word will offend someone, sidetracking the conversation into an argument whether the words we uttered make us insensitive, racists or bigots?

For example, if you declared the evidence in Fergeson, Mo., is inconclusive, or that perhaps Michael Brown was not a good guy, you wouldn’t be able to argue your view because, obviously, your words “prove” you’re a cop-loving racist pig.

That is the true evil of Political Correctness: It’s trampling Freedom of Speech.

And the worst part? We’re doing it to ourselves.