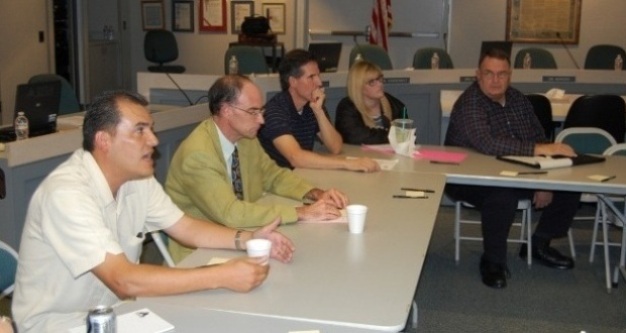 Four candidates have applied for the vacancy on the Anaheim City School District Board of Education created when James Vanderbilt took his seat on the Anaheim City Council. They are: Maureen Christensen, Jackie Filbeck, Veronica “Ronnie” Mayer, and Victoria Ramirez.

Board Members Jeff Cole and Ryan Ruelas screened all applicants to determine which applicants qualified for an interview, and all four applicants were deemed so.

The ACSD Board members will conduct public interviews of the applicants at a public meeting this Thursday, January 8 at 4:00 p.m.  Since there are presently only four members of the ACSD Board, the winning applicant will need the votes of three of the four board members to be appointed.

One of the applicants, Maureen Christensen, was a candidate for the Anaheim Union High School District Governing Board in Trustee Area 1 this past November. She lost to Al Jabbar, the appointed incumbent and Orange County Employees Association activist, receiving 28.2% to Jabbar’s 49.4% (a third candidate, Linda Lobatos, received 22.3%). Judging by her bio, the 20-year Anaheim resident has been very active as a school volunteer and parent leader,, and there can be no question about her qualifications to serve.

Victoria Ramirez, another applicant, is a senior project manager with Jamboree Housing Corporation and serves on the Anaheim Planning Commission, to which she was appointed in 2008 by then-Councilwoman Lorri Galloway. Jamboree is a non-profit developer of affordable housing, and has developed several projects in Anaheim.

Jackie Filbeck is a realtor and life-long Anaheim resident who went to Loara High School. According to OC Political, she unsuccessfully applied for a vacancy on the AUHSD Governing Board in 2012:

Jackie Filbeck (R-Anaheim): She noted her working relationships with each of the elementary school boards that feed into AUHSD, her experience on education committees, her roots in Anaheim, and her professional background in accounting and contracts.  She believes the board “manage[s] the district collaboratively” to ensure student success, sets policies and negotiates contracts, and serves as a community representative.  She states outstanding board members “do their homework;” investigate issues; stay informed; are each a people person who interacts with the community, staff, and students; represent the district to the community; and need to be nice people.  Her involvement in Anaheim schools included three years as a PTA President, work with school board members, service on numerous committees, art programs, school carnivals, reading programs, growing a PTA board from 4 people to 50 people, sports leagues like NJB and JUSA, directing girls’ softball; she stated she gained knowledge of parliamentary procedure from her group involvement; she has been a real estate agent, managed trust funds, been a notary, been a certified signing agent, a businesswoman, a Field Representative for Assemblyman Chris Norby, and a 12-year St. Jude volunteer.  She stated she would be honored to serve, was motivated to apply on her own and by herself alone, is a good learner, wants to expand mentoring and tutoring programs, and would like to serve as a community resource.

Christensen and Ramirez would appear to be the applicants with the best chance of appointment. Christensen has extensive experience in various committee, advisory and oversight positions. Ramirez brings extensive public service experience as a Planning Commission and her professional work is fairly immersed in the public policy realm.  Ramirez, on the other hand, is more in line philosophically with the ACSD Board majority.

The matter is by no means closed if the ACSD Board votes to fill the vacancy with one of the four applicants. Unsuccessful applicants and/or their supporters can nullify the appointment and force a special election by submitting a qualified petition signed by 1.5% of ACSD registered voters (966 valid signatures) within 30 days of the appointment. This happened in 2007 when the Anaheim Union High School District Board of Trustees appointed Harald Martin to fill the vacancy created by the death of Denise Mansfield-Reinking. The result would be a March special election with a very light turnout.