UPDATED: Council Districts To Be Adopted By End of 2015, Hopefully Sooner 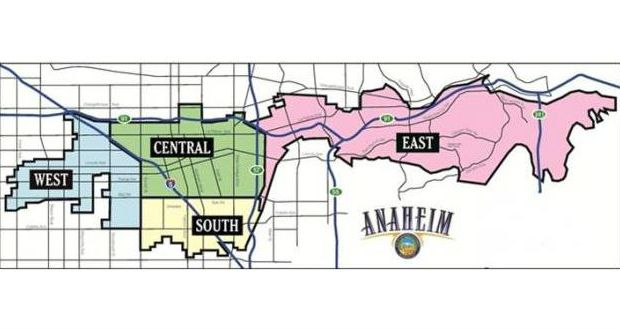 The Anaheim City Council held a work shop yesterday on implementing Measures L and M. The former requires councilmembers henceforth be elected in by-district elections and the latter expands the council to six members.

City staff laid out an implementation plan with a conservative timeline of adopting district maps sometime between September and December of 2015. Councilmembers made it clear they prefer district lines to be drawn as soon as possible. The more time it takes to draw the lines, the less time council aspirants have to prepare their council campaigns because they won’t know for sure which district they live in, whether that district is up in 2016 and whether it will be an open seat.

City Attorney Michael Houston led the presentation, along with the deputy city clerk and Ben DeMaio, the former counsel for the County of Orange. DeMaio has considerable experience stemming from decennial county supervisor re-redistricting plans that passed legal muster.

City Hits Early Snag In Measure L Implementation
Implementation has already hit a minor snag. The settlement agreement between the City of Anaheim and the ACLU (on behalf of Jose F. Moreno and two other plaintiffs) mandate the creation of an advisory committee to “assist” in the development of council district maps, and stipulates that the default iteration to be three retired OC Superior Court judges who live in and are registered to vote in Anaheim.  The word on the street had been that there were nine such judges, but Houston reported there is, in reality, only one such retired judge.

Houston proposed – if the council agreed – broadening that pool to include retired state and federal judges, and not making Anaheim residency an absolute requirement. He stated he has knows a retired judge who is interested in serving on the advisory committee but does not live in Anaheim. This would require the assent of Moreno and the other plaintiffs. Houston informed the council that he spoke with one of the plaintiff attorneys on Monday, who was willing to consider this proposal but has not conferred with the plaintiffs on the matter.

Mayor Tait  – and the entire city council – agreed with this approach, stating his preference for an advisory committee of judges because it would imbue the process with “impartiality.” The question is whether the Moreno and the other plaintiffs make this easy by agreeing to amend the settlement, or refuse to the change in order to force a 9-member advisory committee made up of Anaheim residents. Under the terms of the settlement, that route would unavoidably involve a considerable degree of racial and ethnic bean-counting into the advisory committee selection process, and make it a more contentious and political body.

Districting Do’s and Don’ts
Houston and DeMaio delineated what state and federal law have to say regarding the creation of council districts.

Council districts must be as nearly equal in population as possible according to the latest federal decennial census – and that is total population, not voting population. As DeMaio pointed out, “one man, one vote” is a misnomer. [Consequently, the Anaheim Hills council district will have more voters than a West Anaheim district, and have less representation on a per-voter basis.]

While the federal Voting Rights Act districts ensure all voters have equal power to elect their candidates of choice, racial gerrymanding is prohibited.  In the 1993 Shaw v. Reno case, the US Supreme Court ruled that while race can be given consideration in evaluating  what is a “community of interest,” it cannot be the sole consideration without highly unusual circumstances. In other words, the council cannot create districts that trample over geographic, topograhic and all other considerations in order to draw a district that is guaranteed to elect a Latino.

Like federal law, the California Elections Code also requires districts to be of equal population, and allows the following factors to be given consideration when drawing the lines:

Per the SCOTUS, small population deviations are allowed for several reasons:

Houston also noted to the council that there is no court oversight of districting process; the city council has the ultimate authority to select district maps.

Both the Anaheim City Charter and the state law prohibit the council from delegating its responsibility for drawing district lines to another body. State law also permits the council to institute criteria for drawing the district lines and set out a process to transition to a six-member council elected on a by-district basis.

The Bizarre “Casting Lots” Standard for Determine Who Gets Short Seat in 2016
Which leads us to a bizarre twist buried in the minutiae of Measures L and M. Expanding the council to six members means there should be three seats up every two years. In order to get there, it will be necessary to have four seats on the 2016 ballot: three full-term seats and one two-year seat.

The most rational, voter-friendly method would be to designate which of the four seats is the short seat prior to the election. That way, voters of that understand they are electing someone for two, and not four years.

Instead, the settlement agreement requires that matter to be settled after the election by drawing straws.

Mayor Pro Tem Lucille Kring raised this issue with City Attorney Mike Houston, who replied that because that bass-akwards (not his words) requirement is now part of the Charter, the council has no power to change it.

Personally, I think the “casting lots” stipulation is vulnerable to a legal challenge, even if it is in the charter, because it deprives voters of the representation of the duly-elected councilman they thought they were putting in office for a four-year term. I’d lay odds a judge would strike that provision if a citizen of Anaheim pursued such a challenge.  In any case, it’s a bizarre method and I’m curious as to how it made its way into the settlement agreement. 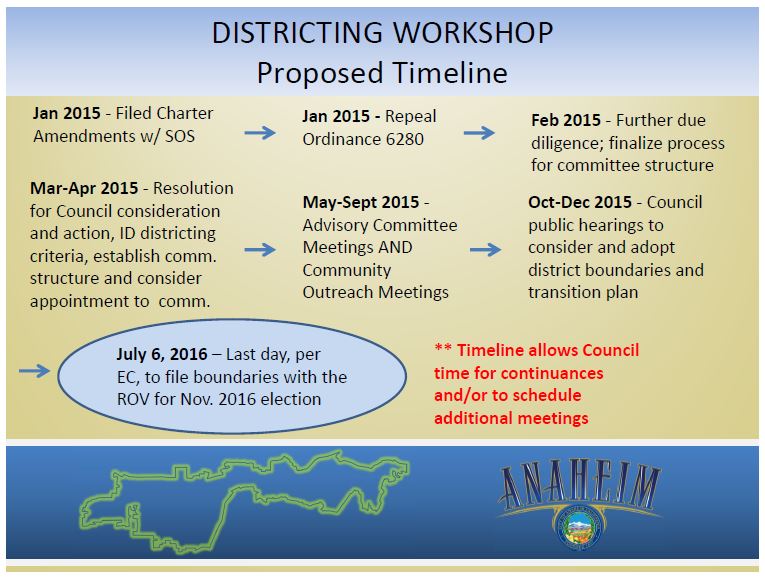 I’ve charitably characterized this schedule as “conservative.” I don’t believe there is any real impediment to presenting districts to the council for a vote by the end of summer.  The demographer hired to draw the maps is doing the bulk of the work, and the public will also have to opportunity to create and submit maps, as well as comment on the maps that are ultimately submitted for the council’s consideration.

Four months of community outreach hearings is excessive and a waste of time. City staff employed the same public outreach plan to promote the Anaheim Citizens Advisory Committee meetings in 2013. Few ordinary citizens attended those community outreach meetings, which were dominated by the same platoon of activists mobilized by OCCORD and UNITE-HERE to recite programmed messages during public comments. There’s little reason to believe things will be any different with these meetings; I’m sure those two leftist organization are making plans for these hearings as we speak. State law requires at least three public hearings (two of which must be by the council) prior to adopting council district maps. That is sufficient, and will permit the quicker adoption of council district lines. If the point of Measure L was to open up running for council to a wider universe of citizens, that purpose is best served to establishing district lines as soon as possible to allow citizens who are so inclined to determine in which districts they reside and make their preparations accordingly.