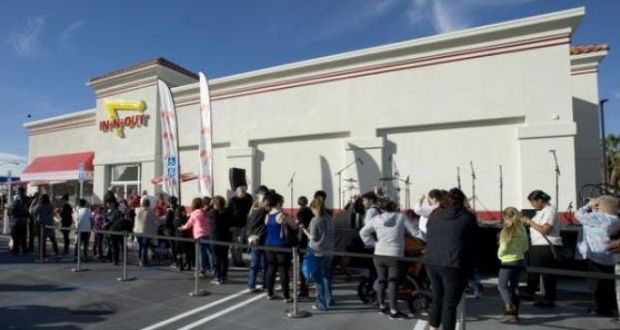 Photo courtesy of the OC Register

In-N-Out (purveyor of the world’s finest fast-food hamburger, in my opinion) opened its 300th store yesterday in Anaheim, on State College Boulevard near Katella Avenue. Die-hard In-N-Out fans began lining up in the wee hours of the morning to be among the first to dine at the newest store, which opened on the 95th birthday of Esther Snyder, the later co-founder of the burger chain that has become synonymous with Southern California.

More than 50 store employees in crisp white uniforms and red aprons huddled together in a half-circle shouting out in unison: “Quality burgers. Ready to go at 3 double ‘O’ Anaheim.”

Fast-food rivals would blast such celebrations on social media. But In-N-Out kept the festivities under the radar. For the most part, the air of secrecy worked. Zimmerman was the only person in line for several hours before he was joined by Frank Aviles and his friend, Edward Andrade, both of Anaheim.

All three were excited to be among the first to celebrate the historic day.

Like other locals, he expressed relief to have an In-N-Out open in this part of Anaheim. Before Wednesday, Aviles would drive to In-N-Outs in north Orange, Fullerton or Placentia to get his fix.

Now, he can walk. “It’s dangerous to be this close,” he said.